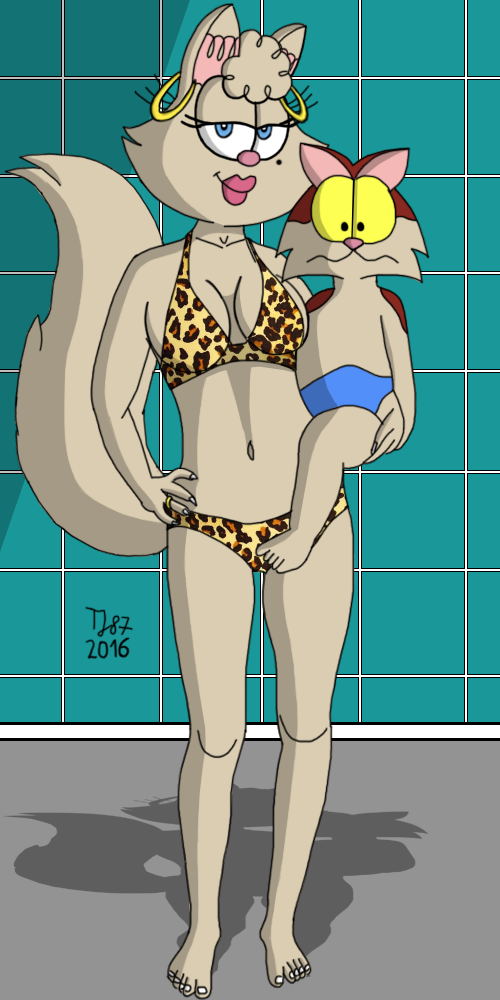 This picture from 2016 has been developed from the idea I've had since 2008, when Penny and Stan had own progeny. Never posted those attempts anywhere due to low quality of those pictures, which retained experiments shown through Skype. Having received positive opinions about this one from my pen friends, I've decided to complete it and post here.


In my stories, Stan manages to build healthy family with Penelope and Mona, bypassing the monogamy during a mission in the Middle East, where our heroes infiltrate terrorist installations in Mecca, the city where only Muslims are allowed to enter. To avoid spoilers, I'll just state here that part of the mission involved temporary conversion to Islam from Stan and the Pussycats before they managed to complete its objectives - the mission went well and while converting back to Christianity, our heroes got state and church permissions to retain their 1+2 relationship as exception for their merits. But this will be another story for another picture.

Anyway, here you can see Penelope with her and Stan's son Adam (one of few names, which sound the same in English and Polish) standing at the swimming pool. The kitten is supposed to have physical traits of both parents; had its fur been white, Adam could pass as Garfieldized version of his father. That ring Penny is wearing on her right hand is supposed to indicate that she's Stan's legitimate wife.

cute scene! If I remember well, this is the first time when Adam is shown, right?

The picture you're viewing isn't the first depiction of Adam I've ever drawn - it's the first picture looking good enough to be posted. ;)

cute eyes on him^6

As you can see, he inherited eyes shape after his mother. ;)

You mean his face expression or his overall look ?