Booze for the Weeaboos

Booze for the Weeaboos

Booze for the Weeaboos by TeeJay87 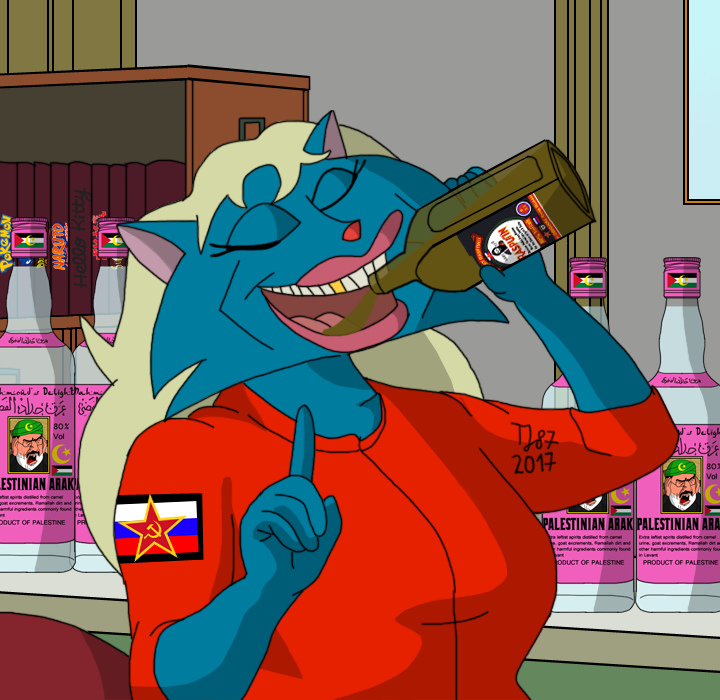 Rasputin Distillery in Moscow has recently released couple of "brand new" liquors to supplement their staple 80% strong rotgut. One of the  beverages is "Caramel Rasputin" sold in rectangular bottles, similar to those Johnie Walker whiskey is bottled. The hooch contains potato ethanol (same like in regular Rasputin Vodkah) , methanol, glycerol, rocket fuel for S-300 PMU-1 ballistic missiles and huge amounts of caramel, giving the mixture brownish colour and consistency of a mud obtained from the puddle.


The title of this picture refers to Olga's preferences in entertainment - apart from lies written by Marx, Engels, Lenin and Stalin, she only reads manga and watches anime, the only pictures approved by Kremlin. As you can see, she has plenty of those Japanese media, all are books with DVDs:
- Pokemon
- Sonic X
- Dragon Ball Z (Olga's third fave)
- Naruto
- Hello Kitty (Olga's first fave)
- Osomatsu-Kun
- Sailor Moon (Olga's second fave)
Of course Salotchkinaya doesn't watch Western animation ("filthy decadent capitalist bourgeoisie filth" as Kremlin propaganda teaches Moscowian knuckle-heads), especially from "Pindostan" (United States of America) and "Vistulan Land" (Poland).
I know it's silly, but that's how do 95% of Russians tend to behave online - they're basically haughty rabid fans of anime and manga, who consider themselves as Russian deities inside non-Russian mortals. Should you need proofs, bother first better Russian on dA or YT and try talking to that individual - unless you're a leftist and/or IJA apologist, I can guarantee you won't be able reasoning that individual.


About time those fans of Putin and Stalin limited alcohol consumption and opened themselves for more sophisticated means of entertainment instead of stuff they get from their rivals. As far as I remember, Japanese are maintaining claims against Russia for Sakhalin and Kuril Islands.


Olga Salotchkinaya belongs to me.

Ingredients:
- a rotten pumpkin
- rainwater
- denaturated alcohol or nail polisher (that usually does not contain alcohol, but he believes so :D)
- yeast
- various aromes per taste (can be an instant drink powder like Bolero)
- pieces of an old newspaper (because of its content of woodfibre and natrium as he said).
Completion:
These all have to be fermented for a week in a glass-barrel, and then distilled. That's all.

Since it's a wine, it may not be potent enough for such vodka connoisseur like Olga; though nobody said she can't give a try. ;)

This cat will be drunk quickly, if it is not already right?

Olga is capable of drinking such amounts of alcohol, that would immediately stun normal person.


Partially it's her leftist heritage, partially obesity makes her ethanol-resistant. ;)