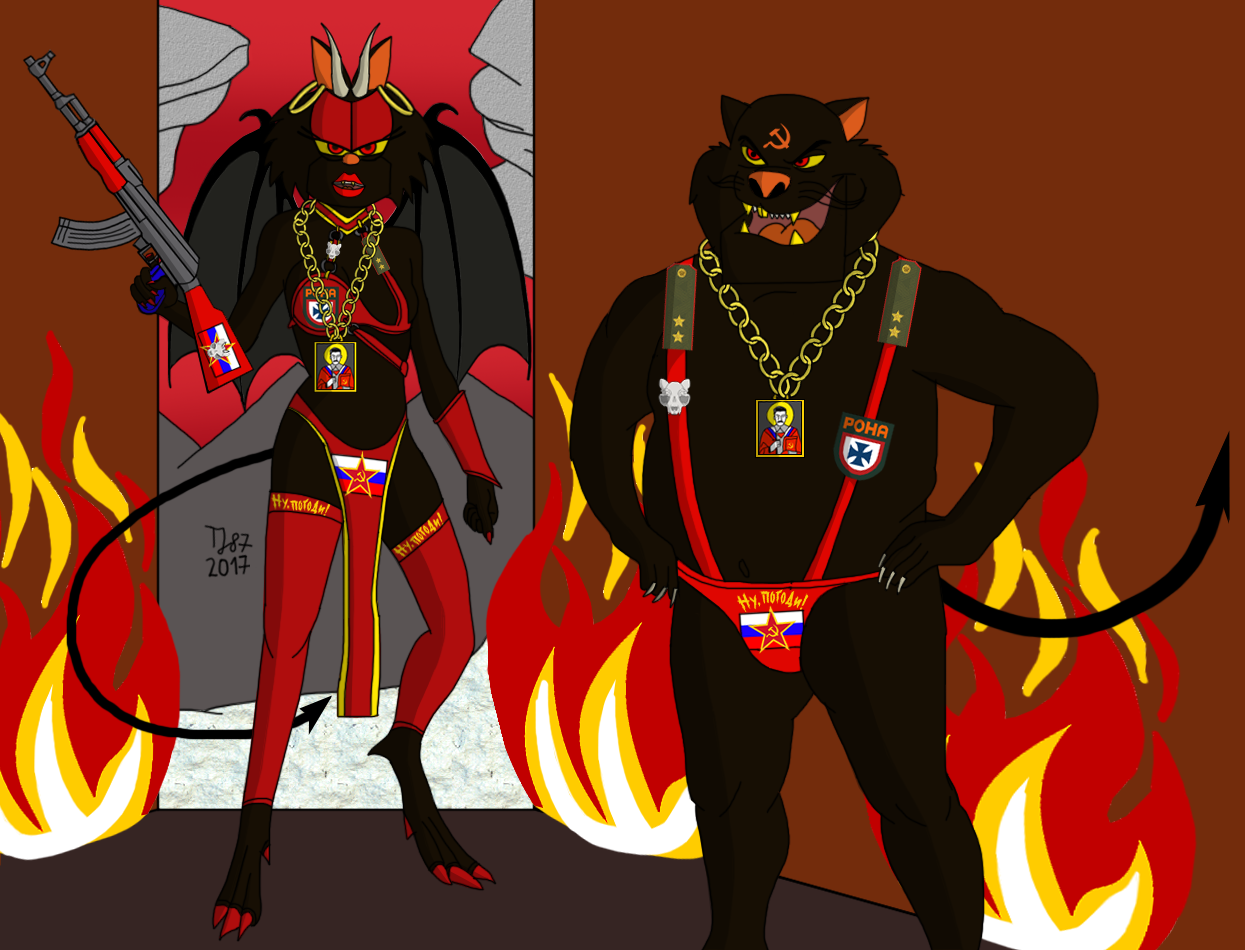 Some time ago I've posted a picture inspired by "Master and Margarita" by Mikhail Bulgakov http://www.fanart-central.net/pictures/user/TeeJay87/853462/Sindri-Daughter-of-Behemoth ; it was about time Sindri's ancestry received explanation.


Those two Russian hellcats from my picture above are of course Sindri's biological parents (as well as her sisters') :

- male is my vision of Behemoth the demon cat https://en.wikipedia.org/wiki/Behemoth_(Master_and_Margarita) , modeled after Fatso from Disney's Chip & Dale cartoons;


Both hellcats are wearing intentionally brief outfits with characteristic heraldry, including Russian communist flags, RONA emblems, amulets with Stalin as Orthodox Saint, cat skulls and Soviet Army lieutenant general rank insignia identifying them as Komdiv (Kommissar Divizyi = "divisional commissar" = lieutenant general in NKVD/KGB/FSB troops). They gained such high position for all the evil they have been performing as Chekists from Infernal Commissariat of Inner Affairs (fiendish equivalent of NKVD). In short - Behemoth and Dumb Alla are devoted leftists from the bottom of the hell.


That realm behind our demonic commissars is Frozen Abyss - the part of hell Woland's fiendish henchmen call "home" and where Russian communists and neo-Nazis go after their life on Earth comes to an end. Basically it can be described as mixture of Dantean Inferno with Siberian landscape, filled with hostile environment and where fire only burns inside artificial constructions. The hellcats are standing inside one of such buildings - lack of inner details is supposed to indicate, that the construction has been completed very recently, thus it's lacking equipment.


Behemoth belongs to successors of Mikhail Bulgakov
Damballa/Dumb Alla belongs to me.

The fatso character is really excellent!
The demonette is really well drawn too,
but almost too pretty!  LOL

When you compare Behemoth's sculpture in Kharkov https://upload.wikimedia.org/wikipedia/ru/4/41/%D0%91%D1%83%D0%BB%D0%B3%D0%B0%D0%BA%D0%BE%D0%B2%D... with Fatso from Disney's "Chip and Dale: Rescue Rangers" cartoon http://disney.wikia.com/wiki/Fat_Cat , it's quite obvious Disney's animators must had been inspired by character from Bulgakov's novel, since both share physical appearance and certain character traits.
Just they had to make him less gruesome in appearance to avoid scaring off kids. ;)

As for demonette, I've gone for D&D design presented by David Roach in "The Return To The Temple of Elemental Evil" https://dnd.rem.uz/3.5%20Adventures/Return%20To%20The%20Temple%20Of%20Elemental%20Evil.pdf - if you scroll down to page 125, there's an illustration depicting briefly-dressed lady with bat wings and bovine hooves instead of legs - she's a fiend from medieval folklore https://en.wikipedia.org/wiki/Succubus adapted by D&D http://forgottenrealms.wikia.com/wiki/Succubus . I've replaced hooves with beastly claws, since the latter seem more matching for a predator.

Heh, not if Fatso wasn't evil enough in the series, but comparing to Behemoth, he's just a pity villain :D

Are the gates of hell open?

Let's say that two hellcats from my picture are standing in front of the gates to the Seventh Circle of Hell https://pt.wikipedia.org/wiki/Inferno_(Divina_Com%C3%A9dia)#S.C3.A9timo_c.C3.ADrculo.2C_Vale_do_F...