My Hero by TeeJay87 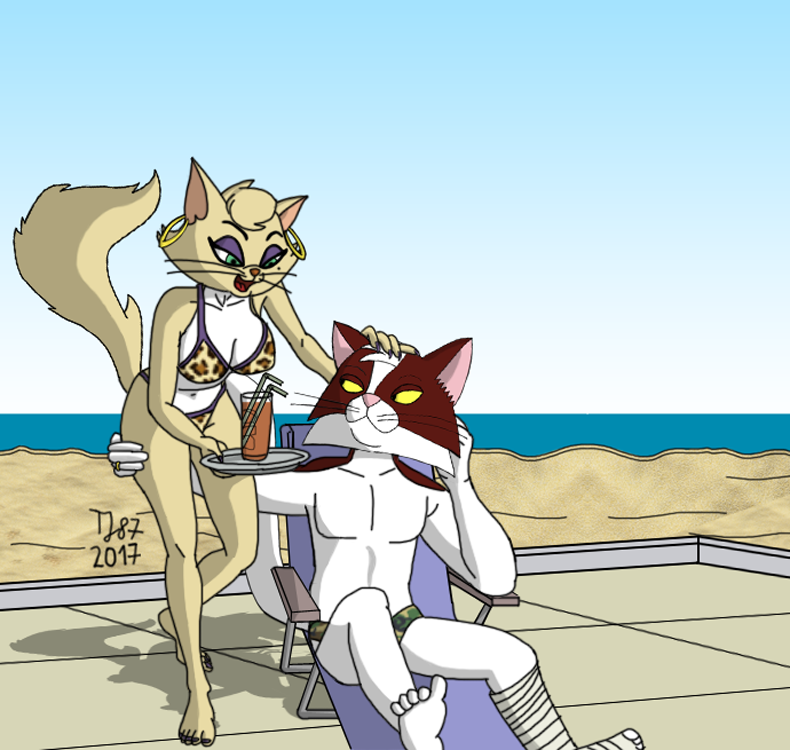 Delilah has always wanted to see Scandinavia, thus Ian took her for a trip. While visiting Stockholm, they encountered "a group of friendly and peaceful Muslims", who had urgent need for spilling blood of "Polackistani* infidel" and abusing his similar-infidel wife from "the Great Satanistan**". Naturally our heroes would never submit to bunch of atheist-theists, thus both Delilah and Ian engaged in combat with kebab thugs, especially since the cats managed to smuggle 0.45 ACP Detonics pocket pistols for self defense.


The results were quite predictable - local fans of Jihad were outgunned, just until the last ones fell in combat, they managed to injure Ian in his left leg with scimitars and jambiyas***. Being aware that Stockholmistani Police is following Sharia Law, our heroes had to hide themselves in the US Embassy, where Ian got proper medical help after Delilah secured his wounds.


The cats returned back home incognito, during a riot caused by those few Swedish, who are not fond of their country suffering from excessive Stockholm Syndrome - the amount of chaos on Stockholm streets allowed them to sneak behind the corrupted Police officers and locals abusing Absolut vodka. Sweden may have nice architecture and landscapes, but its inhabitants are spoiling their own land.

The title of the picture is reference to the story, since Ian stood on bad guys' path and successfully protected his love from those brigands, not caring about slashing wounds caused by Muslim melee weapons. With such care he receives from Delilah, Ian's wounds shall heal soon.

------------------------------------------------------
*Polackistan - Muslim term for "Poland" ("Bolanda" in Arabic and "Lechistan" in Turkish)
**Muslims all over the world have been calling the United States of America "The Great Satan" or "Great Satanistan" since the presidency of George Bush. Partially due to their contempt towards the traditional Western culture, partially because the Muslims fear American weaponry that much (mostly aircraft and M1 Abrams tanks), that they view those fine products of American industry as "fiendish inventions".
*** A scimitar is Arab-Muslim sword with curved blade, and a jambiya is traditional Muslim dagger shaped in similar way to scimitar. Both blades have been Muslim warrior's standard issue since at least 622 AD.

It seems to me that Stam is being very well taken care of! And with a certain stewardship!

That's Ian, not Stan - they differ at first glance with blotch colors http://www.fanart-central.net/pictures/user/TeeJay87/849867/Stan-and-Ian-Tutorial---step-by-step