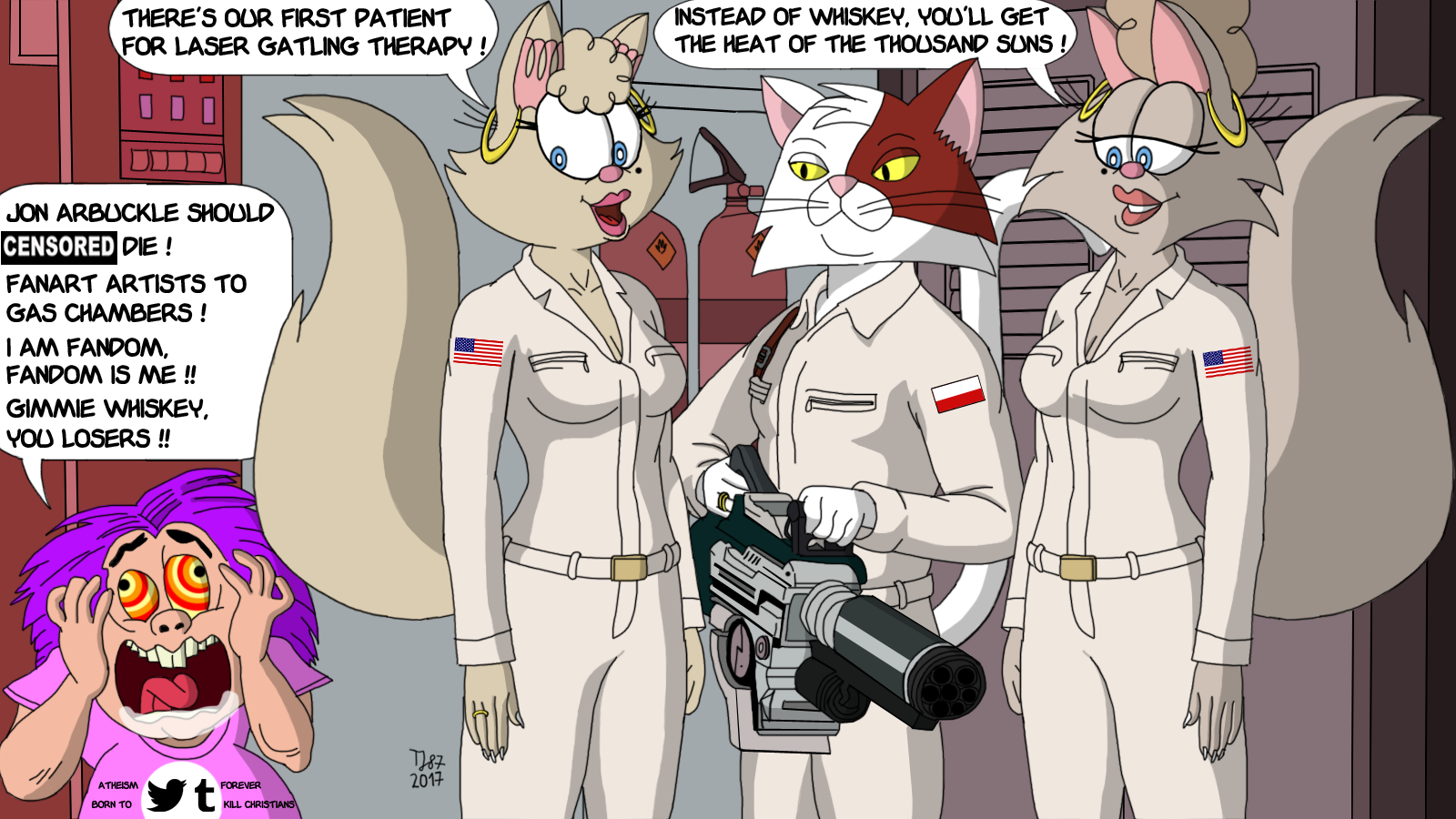 Completed version of http://www.fanart-central.net/pictures/user/TeeJay87/855385/Pussycats-in-Scientist-Outfits-WIP-2 with additional character behind Penelope - that coked troll doll is supposed to be one of those loonies, who continuously harass strangers on Twitter, Tumblr, deviantART, YouTube, Weasyl and similar online cesspools due to foolish reasons.

Those of you, who encountered such online parasites, should find this picture amusing. In case you needed evidence for such creatures existing, google "Jon Arbuckle is evil tumblr" and "Bad Garfield Art Twitter" - if you have functioning frontal lobe, you should get enough proofs to agree, that such addle-coves soon will be a serious threat to the society if they are allowed to breed without control. Those outspoken idiots call themselves "atheists" and openly reject moral rules, thus the heraldry on loonie's shirt.

The depicted coked troll doll/outspoken idiot/anti-theist atheist/loonie/however you call those creatures in English is not supposed to resemble anyone particular - its resemblance to living people is not intended.

Well, my day has been better until I got to know about those dumb trolls with this kind of hatred :D
As I could understand from that guy's tumblr, he hates every human character, not only Jon.

Won't lie - they all are so disgusting that it can't be described in words; but at least they're good materials for satire. ;)

Indeed, at least they're good for something :D

Though they'd have been most useful, if they had been sent to clear minefields by detonating the mines with themselves. ;)

You may have heard that coked troll dolls ruling Sweden have recently banned milk as "hate symbol" http://libertyhangout.org/2017/11/cultural-marxism-steroids-sweden-declares-milk-hate-symbol/ & http://speisa.com/modules/articles/index.php/item.3997/sweden-lists-milk-as-a-hate-symbol.html

Too bad the Swedish will either have to travel abroad to buy milkshakes or to make illegal ones.

Sometimes I wonder, how can such people live on the opposite side of the Baltic Sea, not that far from my homeland...

what about other colors of milk~~