Tweety and Surface-to-Air-Mouthful by TeeJay87 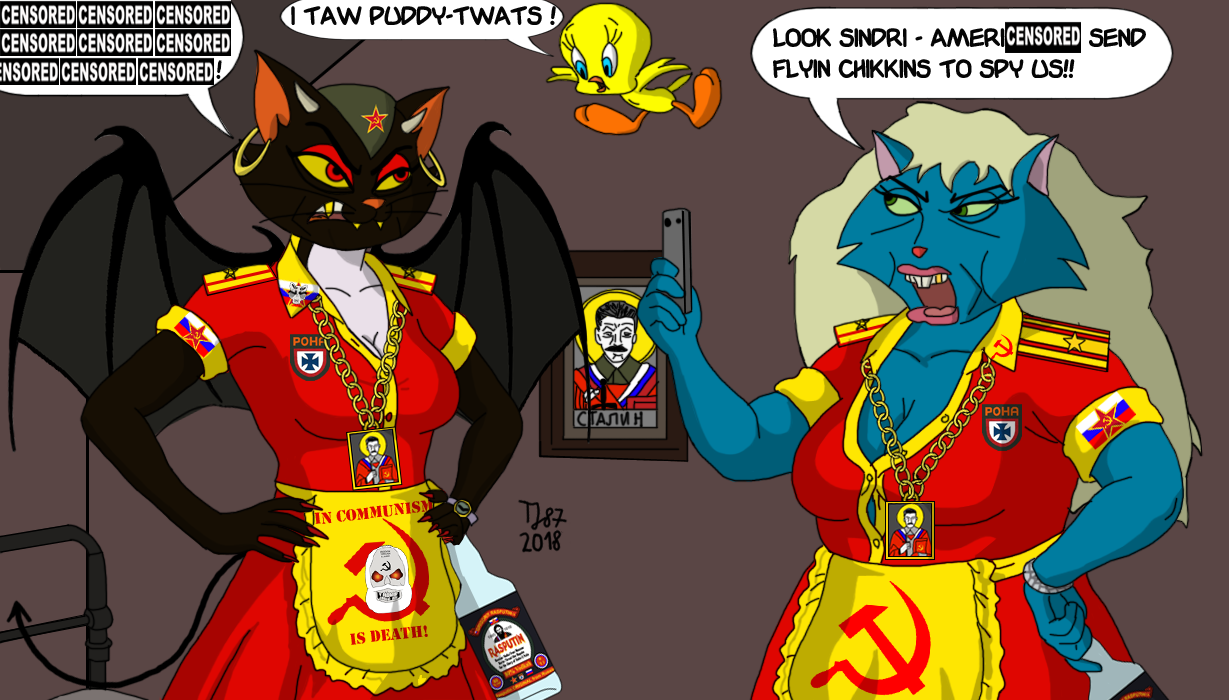 Ladies and Gentlemen, for the first time in my gallery - Sindri http://www.fanart-central.net/pictures/user/TeeJay87/853462/Sindri-Daughter-of-Behemoth and Olga http://www.fanart-central.net/pictures/user/TeeJay87/848827/Russkaya-Gawhubovaya-Olga-Salotchkinaya put together in one picture and supplemented by Tweety from the Looney Tunes.

Both Muscovians wear Russian Army Major rank insignia, though Sindri has privileged position as a member of Fiendish Commissariat of Socialist Affairs and Infernal Advisory Command Musk-cow (notice her Marxist apron) ; Olga is simply a Battalion Commissar in KGB.


The amount of jokes here includes:

- Tweety's staple joke, modified a bit to match the characters;

- "Russian Maids", being twisted mirror of French Maids - as you can see, dressed in colors pleasant for leftist eyes only;

- traditional Russian communists' approach to state atheism - they call themselves "atheists" yet they worship Stalin as their deity;

- and the title itself is a parody of surface-to-air missiles (SAM) - you can tell that Tweety has flown directly into their flak.


Since the case of Sergei Skripal is commonly known worldwide and slurs have been censored in the picture, I do not see the need for using mature content filter here.


Tweety belongs to Warner Bros
Sindri and Olga belong to me.

It would be even more funny if Sindri has been lisping, just like Sylvester :D

That Stalin-icon is also priceless, something that Bartos would hang above his bed, kiss and offer Koccintós (a cheap wine of poor quality) for him XD : https://www.youtube.com/watch?v=5Qufs6jjNvU

You've just given me an inspiration for a future project, I appreciate that! Thanks. :)

So many bad words xD  love it

Not to mention that Rasputin Vodka does actually exist https://www.heinemann-shop.com/hd_en/rasputin/rasputin-vodka-37-5-0-7l-0,7l.html - just the real one is 37,5 % strong instead of 80% from my picture.

Think the real-life version has limited volume for palates not accustomed to ethanol bombs. ;)

You did very good on the detail of the bottle !
I’m no drinker but my car loves ethanol

I've redrawn the basic outlines of the label, then I've gone for more vivid colors and some additional details, supposed to indicate the origin of the booze. The label's closeup is here http://www.fanart-central.net/pictures/user/TeeJay87/851399/Rasputin-Vodka-Label

I've gone for his classic look, as he appears in original Looney Tunes.