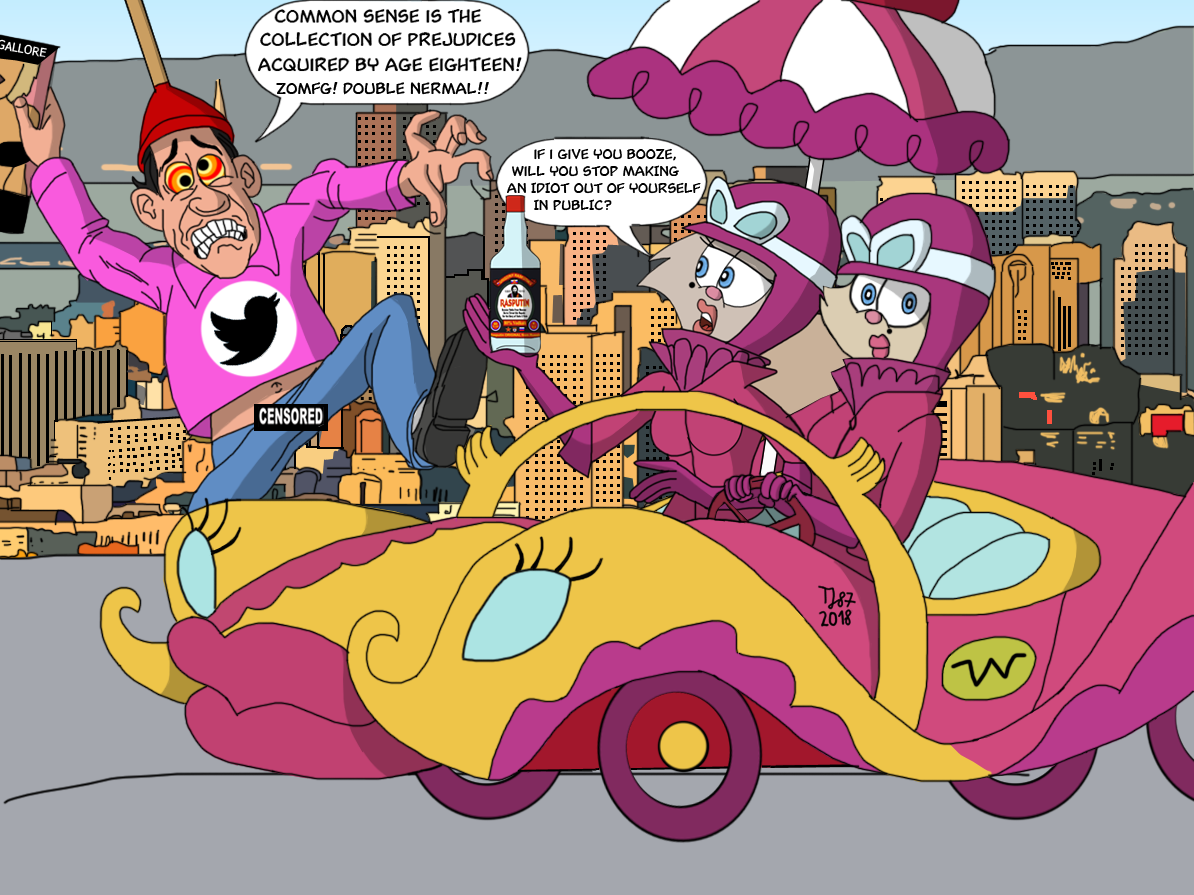 - Mona has been added (being Penny's twin in my fanon - I was not following the 2017 cartoon scheme that Penelope Pitstop has her own twin);

- instead of repeating 1960s background, the Pussycatstops have been depicted dashing around the capital of Californian deviants (San Francisco, or "San Freakcisco", how do my American pen friends call this den);

- and one of the San Fran locals is their race opponent - to avoid using words commonly considered as offensive in public, feel free to call that loonie Tweet Dastardly; you can see him performing one of his dirty (and I do say dirty - just look at him) tricks to prevent the Pussycatstops from winning the race; hopefully he lacks skills as much as moral spine and brain.


Tweet Dastardly was based on rabid Garfield anti-fans from Twitter, who keep spamming Garfield's Twitter account https://twitter.com/garfield with stupid comments (intended mistaking Penelope and Mona for Nermal) and awful pictures (mostly Garfield with visible genitalia or performing coitus) - I do not provide links to those junk, since it can be easily found after brief research.


If you already had experiences with such or similar Twitter morons, you should understand the point I am presenting above. Since we SADLY cannot delegalize idiocy nor legally kill those dregs of humanity, nobody will forbid us laughing at them in comics and jokes.


The depicted Twitter Cali-loonie is not supposed to resemble anyone particular. His resemblance to living people is not intended.


PS. I'm wondering, how many crazy Twitter users will be mortally insulted by my innocent picture. I expect them traveling to my homeland and suing me in a lawsuit for "hurting their feelings" - especially since we all know, that average Twitter user can't find my homeland on the map and that courts in my homeland don't take up such cases.  I'll also be glad if the aforesaid cyberbullies buy me a visa to their homeland and two-way plane tickets to challenge me in a duel like 19th Century gentlemen used to do. Should the latter happen, I'll finally have the opportunity to visit my pen friends from the States at loonies' cost.

Tweet Dastardly is an even worse villain that Dicky and Muttley. ;)

And it has been proved, that California isn't safe https://grrrgraphics.com/the-california-switchblade/

Think that SJWs and most of Californians are like that.

They look great in Penelope's costume, but I especially like is the city landscape in the background: it looks easy, but it's not.
Right now I have a hard time in making such for BM's next chapter, even it is still set in the outskirt area of Monterrey, a bit further from the center.

As for the Anti-Garfield fans, is there a way to "flag" them like in Youtube or Facebook due to "insulting content towards a community"?
Sorry, I have never used Twitter as of today, so I don't know if there's such, but I assume there's something similar.

I can send you the San Freakcisco landscape without the characters if you wish  - will spare the chore of drawing such background. ;)


As for Garfield anti-fans (that's the proper term) - I don't use Twitter due to their presence, so I don't know if there's a way of dealing with them. Perhaps bribing Twitter administration would help, though I expect they'd demand a really hefty amount of cash to block those loonies.

That would be great!
Because of the limited space of a square, I can use only some of the buildings, not the whole landscape, but it would be even better than nothing :)
You can send it to this email address: sumeghy.oszkar@gmail.com
Or if you know any other way to share, please let me know, but maybe the email is the simpliest.

Just sent the email with attachment. ;)