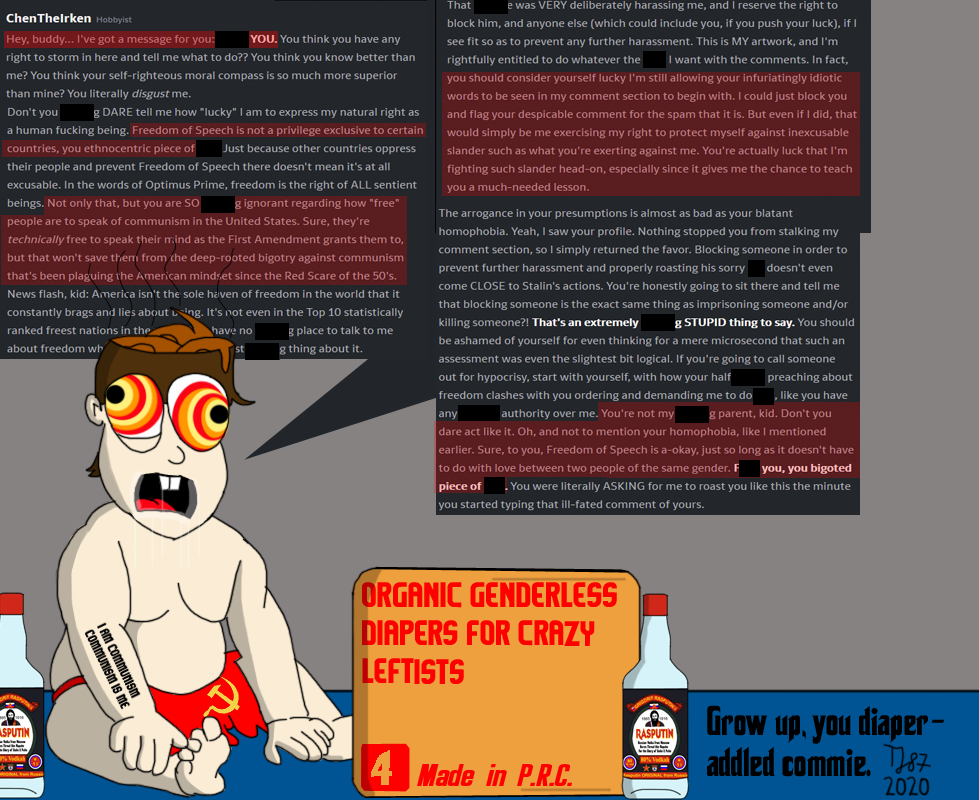 A week ago my pen friend from North Carolina has shown me one of the Clintons' henchmen on dA, who writes stuff like this https://www.deviantart.com/comments/1/525702885/4077765182?fbclid=IwAR22TjWDFfmutML8d2srgCDxBxH-J... and posts red tape like this https://www.deviantart.com/shaneysqueeboy/art/Super-Sanya-The-Red-Son-ABDL-DC-Elseworld-835053249


The friend of mine asked me to draw "Comrade Red Diaper" and after a week of work (including prototypes), the man-child of the proletariat has been drawn using the references he was kind to provide https://www.deviantart.com/shaneysqueeboy/art/Shaney-s-Potty-License-724065033

I do believe that Comrade Red Diaper should go to Russia as he is said to desire and check on his own skin, how do the Stalin cultists from Moss-Cow approach fans of Trotsky like him. It would have always been one moron less to steal the oxygen.


Edit: Comrade Red Diaper's bile has been censored due to decency reasons.

For some reason, his head reminded me Jon, when he gets dumb in the strips XD

Anyway, I think he wouldn't be such enthusiastic about communism if he had idea how the federal states of the USSR and its satellite countireslike ours used to live their everydays, especially in the darkest era from the end of WW2 up to the end of '50s.

I used Comrade Red Diaper's (CRD) actual ID picture  https://www.deviantart.com/shaneysqueeboy/art/Shaney-s-Potty-License-724065033 - it's quite possible he did rip off Jon, just like his idols from Moss-Cow copied B-29 bombers, Stg44 assault rifles, Ta-183 fighter plane concept, and all their post-WW2 tanks from Panzer IX plans. Because the idea of intellectual property is against Lenin's and Stalin's teachings. xD


Speaking of which, I honestly doubt he'd survive to live under the Soviet yokel, regardless of the era:
- Lenin and Stalin until 1945 used to have such morons punished by "paragraph 7,62mm Russian" - with a headshot from a pistol, it'd also apply to North Korea as well;
- Khrushchev would've ordered sending the diapered fool to a gulag in Siberia;
- Brezhnev and Gorbi would most probably order locking CRD in a hospital for mentally ill under KGB's supervision;
- Andropov would order the KGB to extract any useful data from CRD with all the violent methods they had at their disposal (including the way Sterling Archer was tortured in the premiere episode with electricity, KGB actually relied on this method and FSB keeps using it nowadays);

- Maoist Chinese would treat Comrade Red Diaper in the most appropriate way - the Hongweibin (Red Vanguards - student red militia erected by Mao himself) would've beaten him with bamboo sticks till he lost consciousness, pour icy cold water on him, dress him in "shame hat" and forced to parade in front of the Renmin Rimbao staff  ("The Red Banner" - official PRC red tape) who would spread the news about "American spy being punished by the guards of the communist paradise in China".

I'm American and that sounds odd and rude to me

I can't understand those citizens of your homeland, who spit at your constitutional values just like Comrade Red Diaper does. If they hate living in their American homeland, they should turn to the proper Federal Authorities and renounce their citizenship.