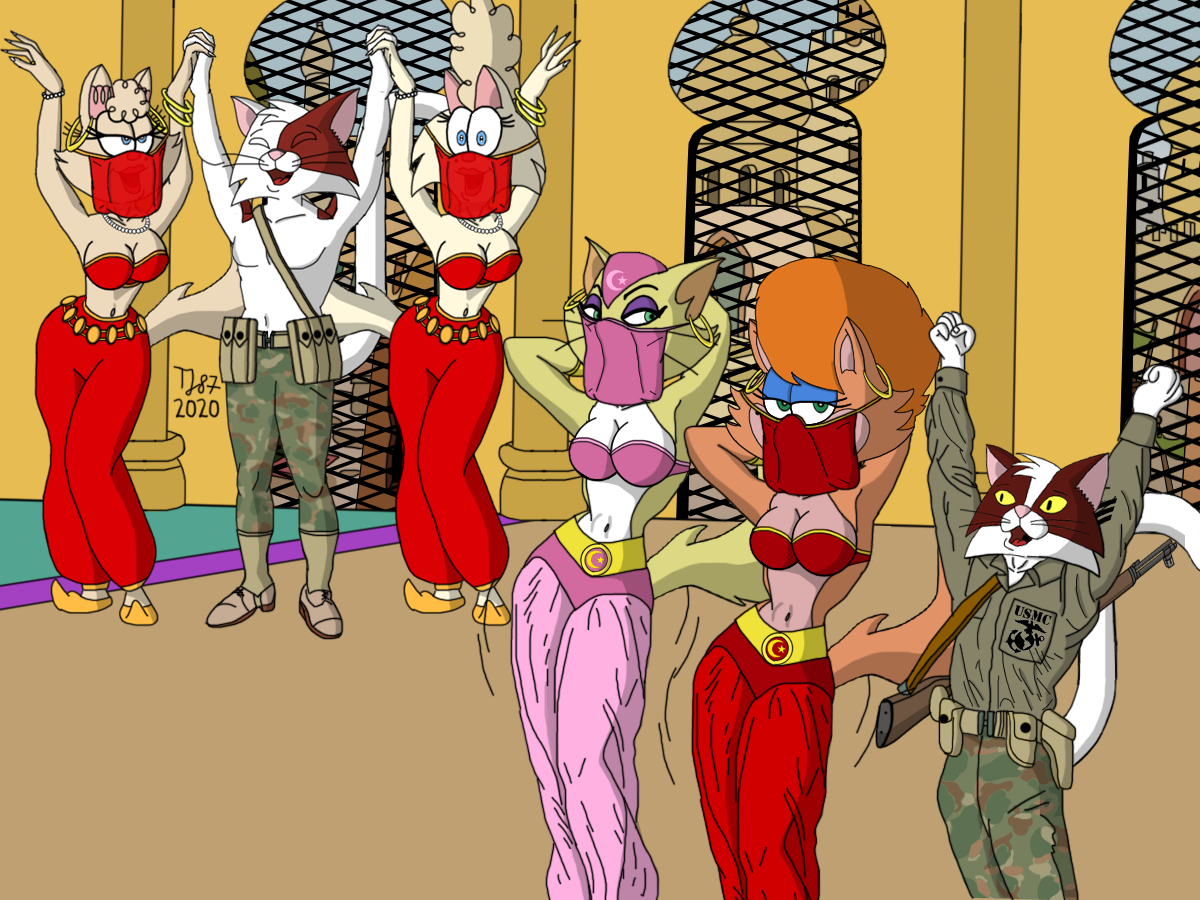 Some time ago, I found this comics book cover https://www.cgccomics.com/boards/applications/core/interface/imageproxy/imageproxy.php?img=https:... from 1952. I would gladly read the comics myself, even despite the artist has drawn the US Marines with a couple of mistakes, including miscolored uniforms and equipment. While drawing this http://www.fanart-central.net/pictures/user/TeeJay87/860381/Pussycat-Belly-Dance-2020 I thought about developing the concept myself.


And the result is above - I did draw Delilah, Kitty, and Ian after the characters from the original book cover, this time with properly depicted US Marine Corps jacket (including the formation logo on chest pocket and Sergeant rank insignia), WW2 gear with M1 Garand rifle, and the M1943 camouflage pattern trousers. Stan had his original outfit reworked as well - he received the same M1943 trousers like Ian, the same belt with SMG pouches and officer shoes; the latter two paraphernalia should identify him as a commissioned officer.


After the characters were completed and adjusted, I drew the background I found matching. I'd like to thank Osprey Publishing for their outstanding WW2 books - the one about the US Marine Corps in Pacific 1942-45 was particularly helpful in completing this project.

If this was around the WW2, it seems like Ian and Stan have been sent mistakenly to the Middle-East by their commander, but at least they can have fun with some harem kitties :D

Those camo trousers-green jacket combinations were commonly used by the US Marines between 1943 and 1953, both in World War 2 and the Korean War. It was the mid-1960s when the Leathernecks received new camouflage uniforms, but even in Vietnam, they still used WW2/Korean War equipment (webbing gear) till at least 1969 as the US Army had the priority of receiving the M1956 equipment (for M16 rifles).

Think that Stan and Ian were sent to the Middle East on the same mission like Bat and Spike from the original 1952 comic book had been https://box01.comicbookplus.com/viewer/46/4677ab0eb7f86b1cafd941e36d35278c/17.jpg with the difference that the feline Marines actually brought the kitties back home. ;)

If you have a dA account, part of the inspiration was Jose-Ramiro's 2011 drawing https://www.deviantart.com/jose-ramiro/art/Tell-it-to-the-Marines-girl-196360153 - though Jose limited himself to the harem girl while I've gone for more complex work.

Though you should still be able to see images, which weren't limited for dA audience only.

I can understand that Toby/Minoan (authors of Tell It To the Marines comics books from the 1950s) intentionally drew the US Marine uniforms in their comics books with flaws to deceive the Warsaw Pact and the PRC since the Korean War was lasting as a stalemate back in September 1952, when the referenced comics book has been published. With the threat gone away and the USMC receiving more modern equipment, I've gone for depicting Stan and Ian clad in properly-looking uniforms, as you can see in this outstanding Osprey Publishing book https://ospreypublishing.com/us-marine-corps-1941-45

As for the females, Delilah got her Season 2 outfit colors (two tones of pink), while her Garfield and Friends companions got more reddish outfits. Kitty's one has the basic color from her premiere episode https://garfield.fandom.com/wiki/Miss_Kitty/Gallery