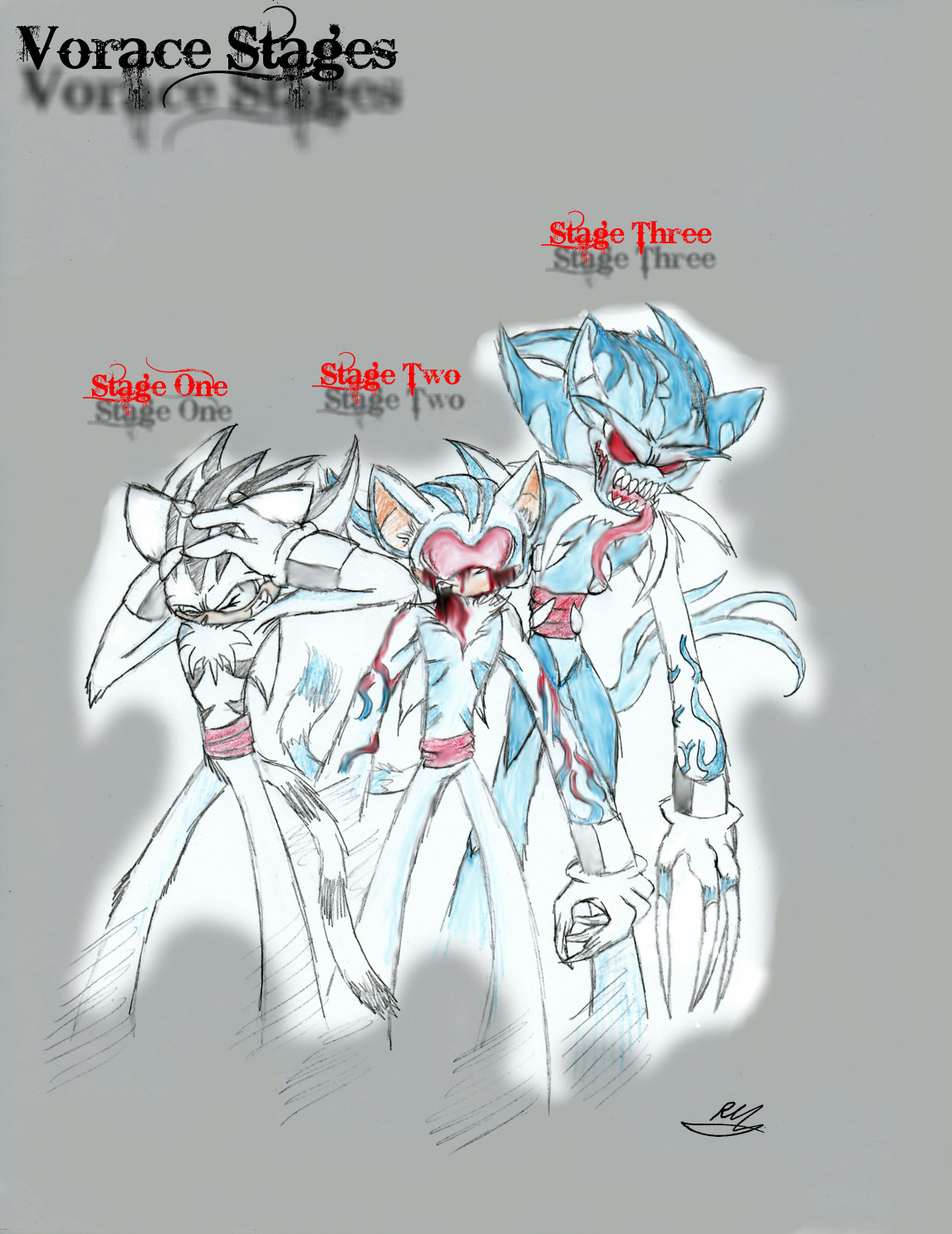 Reconize him? These are the stages from Luminos, to Vorace (which means Vicious in portuguese, maybe...).

2. Blood leaks out of his eyes (like Maya from Heroes!) and mouth. The blood becomes solid, and blue, and wraps around his body, engulfing him in tenticals (you are now excused to say "ewwww!" or throw up). His white fur becomes a light blue, while his stripes turn a darker blue. Claws start to grow on his fingers.

3. He is a mindless beast now. Final stage. He has forgotten who he is and cannot reconize friend, nor enemy. Little brain activity. Acts on instinct only, and has no reasoning. Senses have been hightened to extremes. Speed type. Has become so fast, that at top speed, it would seem like he is using the ability "Chaos Control" when really, he's going as fast as the speed of light, allowing him to "teleport". Agile. Hard to capture. Live's inside Luminos' blood.

Is that a good 8D?
Ok,I have a mistake I must admit.'Cuz you and The Con have demon-possess OCs now I have my own.it's terrible!I feel like a copycat!But he's too cute to get rid of!(especially his three fox-like tails)

Me:what?Can I help it if i'm extremely good at this "make a new guy" gig:3?

in this pic, yes.

all my characters deserve EVILNESS! ^^

cool details very creepy too perfect for this month

Me: i know. But if he didn't inherit it, there would be no pain. No sadness. No fear. And people who like Condemned would flame me.

Me: no one likes condemned critic.... except probly ryu. but we dont care about her.

Me: calm DOWN, Mikki! This only happens if he's really angry, or terrified! Look at that! He's almost NEVER that!

G. Eclipse: <except maybe on Halloween...>

Me: dude, that would SUCK.

Me: that WOULD suck.

Mikenno: *is practically screaming at critic* BUT THAT DOESNT MEAN YOU DIDNT DO IT!!! THIS IS HORRIBLE!! THIS IS INSANE!!!

G. Eclipse: <don't you DARE joke about this, Critic!>

Mikenno: *sweeps his tail across the floor, knocking critic off her feet* *is practically in her face, yelling* THIS IS NOT A LAUGHING MATTER, CRITIC!!!! LIVES ARE AT STAKE HERE!!!

Me: mikenno, calm down goddammit!!!

Mikenno: ONE TRANSFORMATION IS ENOUGH TO END THAT KIDS LIFE!!!! HAVENT YOU THOUGHT OF THAT????

Me: but that's where you're wrong, Mikki... he's too strong for that... and besides, this isn't a FULL demekarr... it's a little bit that lives inside his blood... it's like a BABY demekarr... well... I guess you can say LUMINOS is the demekarr...

Mikenno: *backs off, but is still angry* eclipse has a fair point. luminos is NOT a demon. it would be like saying i was a fish. it is NOT TRUE.

Me: but i thought you were a demon...

Me: i just said that.

Me: eclipse, calm down!!

Me: you were doomed to be a slave to Condemned forever, Eclipse.

Me: thanks for the help, missus NEGATIVE.

Me: the story or the verb?

G. Eclipse: <it's hard... it's very hard, and it's harder for me to calm down then Mikenno... and that's what got me into this mess in the first place.>

G. Eclipse: <don't you all go silent like that... you knew this from the start!>

Me: we're silent coz there's really nuthin' to say....

me: hmm... hey! i think you really DID have a mental disability, Eclipse! You had Dysthymic Disorder!

Me: It's a form of depression.

Me: that explains a lot XD

Mikenno: *rolls his eyes at mish*

Me: Actually no. I made a list of the mental illnesses that i base MOST of my characters on. Come check it out, it is it's own story! ^^

Me; critic, you're a freak.

zuko: IM outta here! *runz away, flailing his arms*
celia: is he taller?

DX NOES HE DOESN'T DESERVE THE EVILNESS!!! Bah, my opinion does not matter lol The eyes bleeding is a thing I shall never get used to o_o Very cool designs though. I noticed he got taller through the transformation, like really taller. Oh well, he is his father's son I suppose :3 GOOD JOB.

he got taller on POIPOSE! :3

also, YOUR OPINION DOES MATTER!!! Don't be a JonASS Brother... XD

Newman is a psychotic happy monster who laughs when he kills.

Me: he won't break out, he will die with the host. Yes, the same Toxins are in this guy, but they move at a much much slower pace, so it would kill him in about thirty years.

Me: *points to Luminos*

Me: *whispering* Luminos has been tricked into thinking he's the son of Mikenno. It's for the best.

Me: don't make him angry or scared.

Dude. I ruin ALL my characters XD

little kids are no exception.