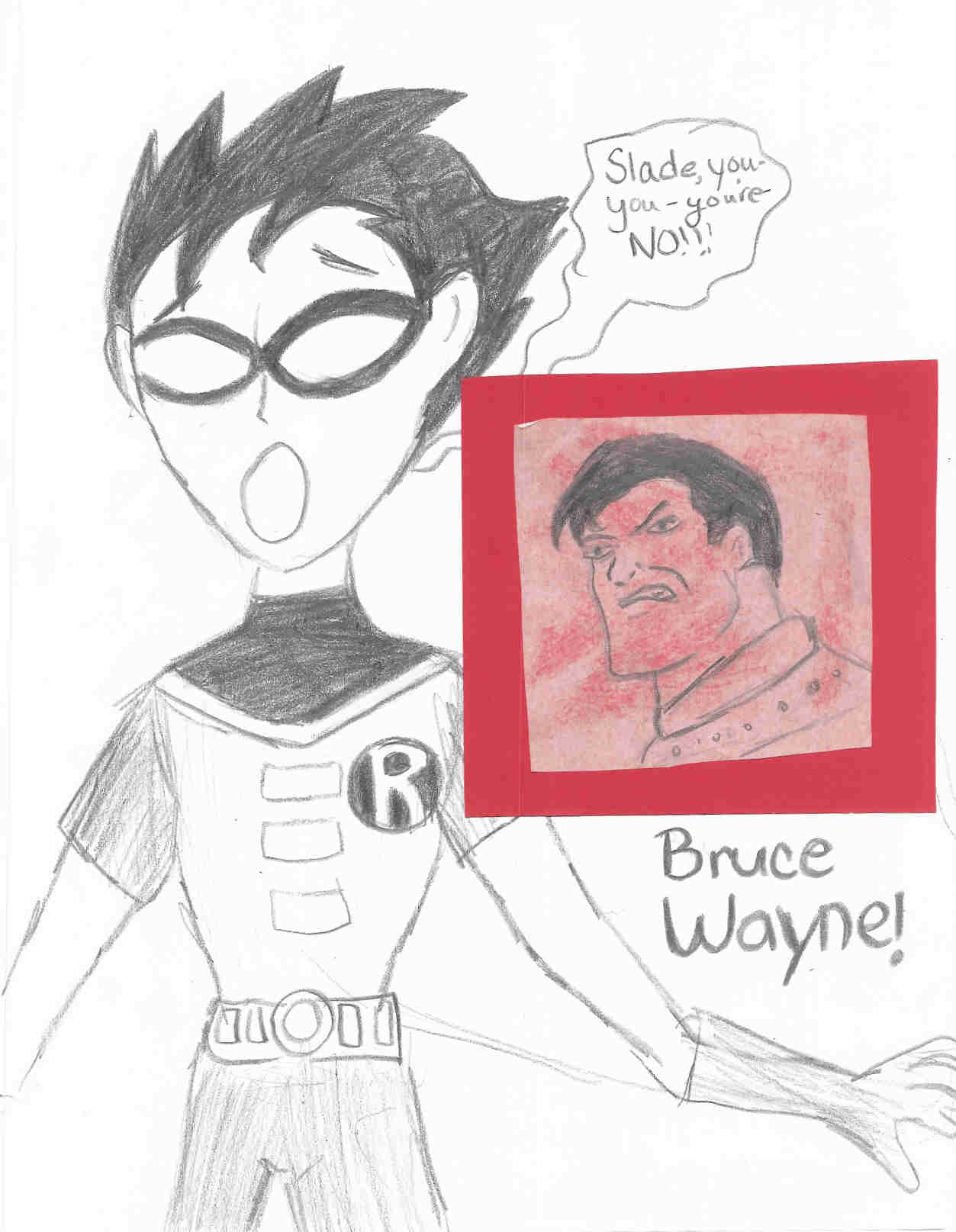 Okay, this picture probably needs an explaination.<br />
I have a well studied theory suggesting that this is how it goes:<br />
Alright, so Robin was Batman's sidekick and they kicked butt together, but after a while Robin decided he didn't want to be a dumb sidekick anymore, so he fixed the shiny combed-hair-nightmare,threw away those hideous green underwear that were way too tight, put on some pants, and joined the Teen Titans. Batman was ticked off, and when Robin left him, he devised a plan to get back at Robin, by becoming(dun dun dun!) Slade, an evil villian who, well did evil stuff.<br />
Batman wanted vengeance! Mwa ha ha!

Lots of people seem to think that Bruce what's-it is Slade. I don't personally but before I knew about Jericho (cue dreamy sigh) I thought Slade was definiatly going to be connected to Robin some how. Also the thought of Slade going gushy on Robin scares me. Slade's way to much of a womaniser to like Robin! Robin can love Slade though..

Even though he is evil, you can tell who he was with the clues.I think slade is cute. :P

Have you never SEEN Bruce's chin? It's his most prominant feature, so it's hard to miss. And no, I don't look at people's chins much (if that's what you asked), but the mighty chin-o-doom on s-man is so huge, and the mask is so normally shaped, it wouls never fit. Anyone can see that.

I find it odd that your explanation is so plausible... but I know one thing that disproves your theory.

There's no way Bruce's chin could ever fit in that mask!

umm... did you mean that as an insult? I hope not, I don't try to be weird, I think I was just really hyper when I wrote that. I'm sorry if I weirded you out or something...

Wow I thought I was weird...

Good job, you drew bruce very well. Many people like the thought of Slade being Bruce Everyone is entitled to their own opinions.

Personally, I never thought Slade was Robin's father or bruce. I fell in love with Slade almosy imediantly and never gave him any relation to Robin , though I do remember I used to think his name was something other other than Slade (I think I used to call him James something) anyway, then I fell in love with the comics and since then he's always been my Sladey Wilson.

Slade takes his mask off a lot in the comics, and then his hair is white, and his real name IS Slade Wilson a.k.a. Deathstroke the Terminator. Therefore, the show will PROBABLY never show his identity, because his identity is Slade.......I need to get a life...

OH My gosh that's what I thought! I thought he was only sending losers (hive) to test their strenth. But then I realized he was pure EVIL and dropped the theory like a to of rotten tomatoes. Alos Slade's nmae is Slade Deathstroke not "Wilson"?? O_o I don't truly know about slade's hair being gray/white because in the episode where slad's make fell off his hair was ebony.

Hey, Namiko-chan! Batman was probably off with Superman and the rest of the Justice League, right?

I've often thought about the fact that Slade was Batman. The only reason I considered it was the fact that Bruce Wayne is a rich sonofa*****. Haven't you ever wondered just where in god's name Slade gets all the freaking Robots, not to mention the gigantic mechanical digger worms!

WOW!!! thats really good hmmmmmmmmmm it could be Batman because when Robin went on Slades side Robin and the gang were fighting on top of Wayne Enterprices so where was Batman hmmmmmm it makes you think doesn't it anyway you did a great job on this pic.*adds to favs* : p

wort wort wort! Slade rocks meh socks!!! But yea Aki_chan is 100% correct! Deathstroke is his other and hes hella badass, and besides hes only got one eye and white hair (well in the comics he does) but good theroy I suppose, however Batman liked to work alone anyways, keke hes a ninja! Oh I dont think he had a son, Rose I think her name was, but yea Slade murdered his wife for some reason....lol no way Slade could be Bruece... LAMO! haha SladeXRobin is hella tight....

NO WAY! LOL! slade is never going to be Bruce Wayne, Sorry u can forget it!

Well, maybe Slade(aka Brucey) got someone to disguise himself as Batman so that Robin would never suspect him.........there's always a loophole. And maybe Bruce Wayne has a MASK that makes you THINK he's some freaky old man named Slade Wilson.....It could happen.(By the way, is Slade really an old man, because he has gray hair, but then again, Rose kinda does,too....oh well.)

I read the comics, too. I just have a different opinion.

when robin was slades apprentace, and then half of the mask broke,i thought it was bruce

Tee hee Ur so kind

ROFLOTO!! heh heh, that would be HILARIIOUOS if that was true! good theroy. mine is that (and yes, i know that this is a MAJOR chlesha) Slade is really...Robin's FATHER!! nice piccy though!
~Keito

-_____-+++ Slade's real identity is not..dun, dun, dun Bruce Wayne aka Batman, you know..It might seem like it to you, but Slade is his own person. His real name is Slade Wilson and he's evilness has something to do with the death of his son Joe and wife Addie. I think that Robin reminds him of Joe, personally. *shrugs* Anyways, who cares..they're gay for eachother!! *dances* Ahem..Well i dunno if you're into that like me..but yeah, to learn more about slade read the original titan comics! he's called deathstroke there!
before i knew all of that i had the idea that..well..XD slade was robin's daddy..just cuz that would've been so freaking awesome..and cute. but yeah. enough rambling.