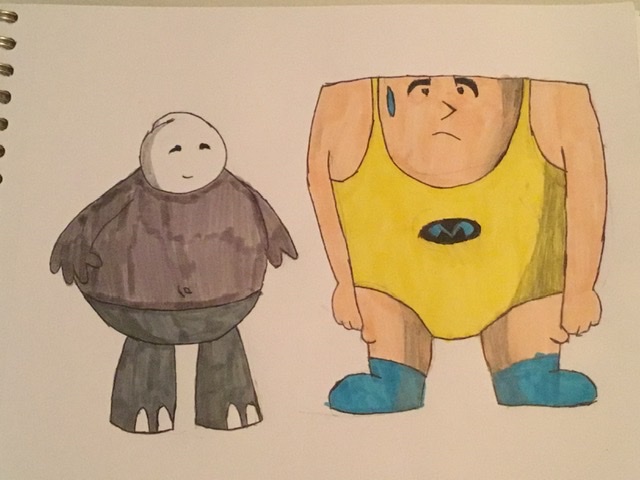 “You better not lay a finger on either of my little brothers or The Cheat, or you'll find out why I'm called ‘Strong Mad’ the hard way...”

The eldest of the Mirrorverse Brothers Strong, Mirror!Strong Mad, despite what his name suggests, is actually the calmest of the three, and is rarely heard raising his voice. He's a total nerd, yet is also a total physical powerhouse. The reason for this is that, growing up, he'd try to maintain his strength at an excellent condition to avoid being picked on for being a total nerd, and eventually he came to enjoy a workout as much as he did an MMORPG.

Mirror!Strong Mad often finds himself annoyed by the antics of Mirror!Strong Bad, Strong Glad, and Mirror!The Cheat, and can often come across as aloof towards them. Despite such an aloof appearance, however, he actually cares very much about them, and if he catches someone picking on either of his brothers or Mirror!The Cheat, he is not afraid to defend them, and is willing to use his strength if push comes to shove, as Mirror!Homestar found out the hard way.

Strong Glad is one of the few residents of the Mirrorverse to have a name different than that of his counterpart from the original Homestar Runner universe. Appearance-wise, Strong Glad is practically the spitting image of Strong Sad. Personality-wise, however, he's a lot more like the original universe's Homestar, except that Strong Glad's not dumb like Homestar.

Strong Glad is a humor-filled optimist who likes writing fantasy and listening to J-pop. Some people, such as Mirror!Homestar, think he's annoying. Others, such as Mirror!Strong Bad, would disagree, and find him an uplifting person to have around.