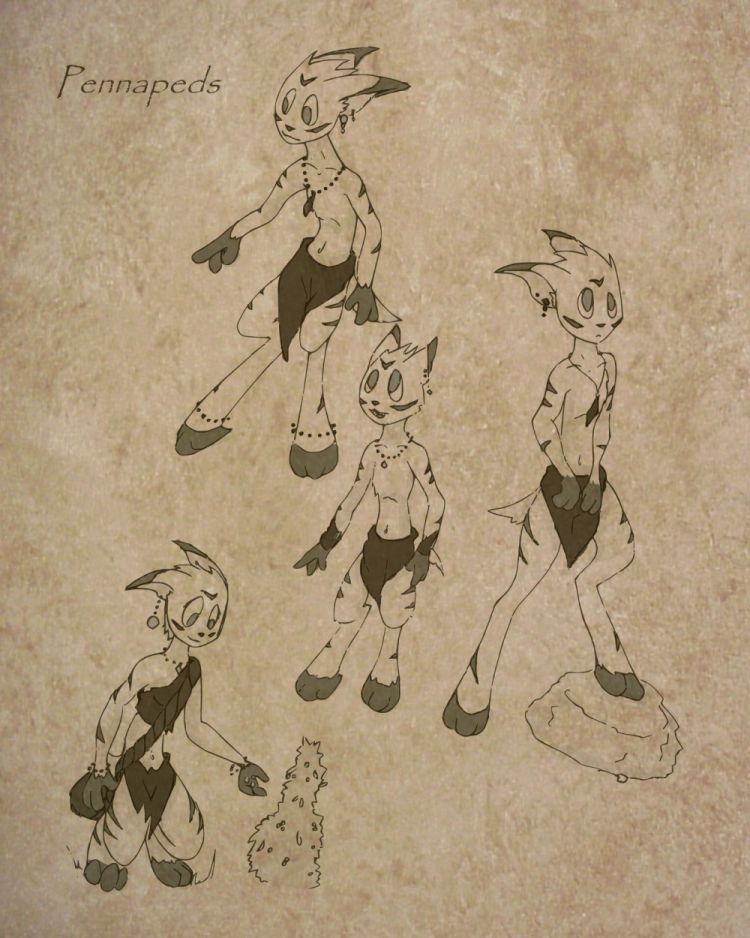 My entry for a contest here on FAC. It's to make a fantasy creature, I thought the Pennapeds would look good on parchment so... Voila!

Pennapeds are an almost kangaroo-like people that live in primitive tribes, the leaders are decided by being sent on quest by elders that require creativity and ingenuity. They are accustomed to speed and Savannah-like terrain, though they travel a lot within their tribes and can live anywhere from desert to forest to mountain. Women gather, babysit, and weave while men protect the herd from rival tribes and apprentice young Pennapeds. To give each other jewelry (usually carved from wood or stone) announces a relationship of some kind, from acquaintance to lover. You never make jewelry for yourself, the more jewelry you have, the more friends you have. Elders tend stay at camp and their only worth is telling stories around the campfire or giving some occasional advice. Young pennapeds are taken care of by their mothers until old enough to be apprenticed. If male, the "pennapup" will learn to fight, carve, scout, and train for speed and agility. If female, she will stay with her mother and learn cooking, gathering, weaving, and basic home keeping. Pennaped fur is among the softest and most luxurious in the world, and though illegal, they hunted and poached regularly. However, they are worth more alive than dead, for they are popular in the slave trade because of their strength and exotic traits. So between warring tribes and poaching, the Pennapeds are on the verge of extinction. It will take plenty of work from either the entire world or one hero to save the Pennaped species.

true...but there's little hope now...'CAUSE I JUST LOVE THESE THINGS!!! I want one!

But Pennaped poaching is illegal! D=<

But seriously you poach one o' them pennapeds and you goin to JAIL :D

Now run before the cops show up. ^^

BWAHAHAHAHA! Thanks! I'll have to draw a picture of me and my new Pennapup! If that's alright. What shall I name it? What gender is it first of all? O_o

'tis whatever you wish it to be El HawaiianTigre! ... And to tell the truth, wanna trade that Sly stealing candy thing for the pennapup pic? ^^; I can't seem to get the gang right. *scratches back of head*

lol Cool, thanks. If you want you can just draw Sly if you can't get the whole Gang down. I know how that is. I think and art trade would be awesome! To tell you the truth I've never done one before! I know what to do and all that but I just never have been asked or ever asked someone else! O_o I think why nobody's commenting on this picture but us is because everyone's scared of how much we're talking! O.O But hey, that's just the way we are right?

You Entered?! *runs off to go check*