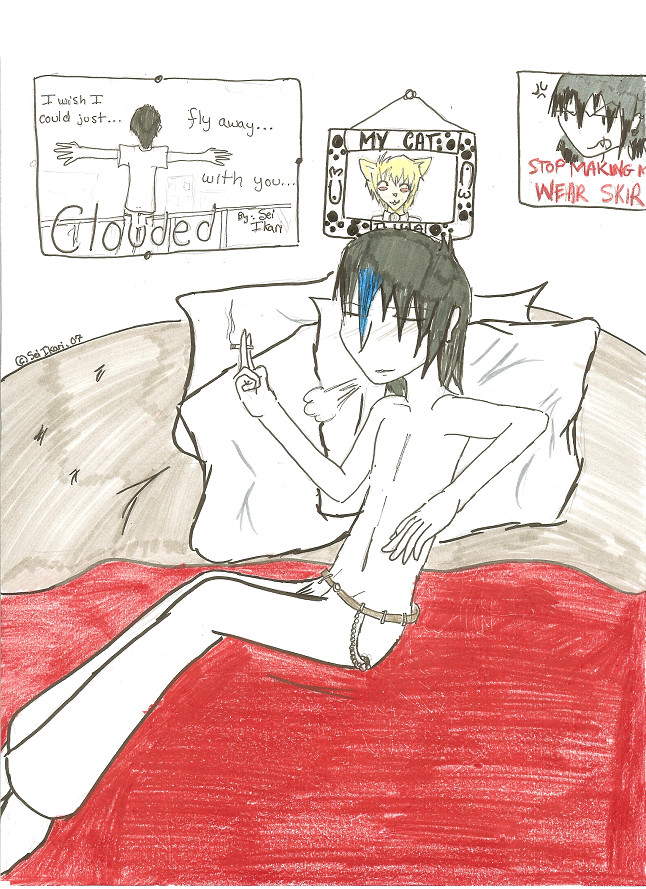 Look, it's Harin, smexing it up for all you lovely people! For those of you who don't know, Harin is an old character of mine who was, to put it bluntly, a whore. He had a story, which I abandoned, but I loved his character so much that I kept him around XD

Anyway, just ignore the crappy pose and LOOK AT THE POSTERS ON THE WALL! And since I'm bored, I'll explain them all:
Left: Promo poster for my manga. I love this image. This is not only a later scene in Clouded, but without the text about flying away, this is what the cover looks like.
Center: LOOK IT'S TUNA!! Tuna belongs entirely to NekoHellAngel. Harin's taken a liking to him and neither of us know why he hasn't jumped him yet O_o
Right: Come on, you know I had to put Kyei in here somewhere. The poster says, in its entirety, "STOP MAKING ME WEAR SKIRTS." Which I will never do XD BUHAHAHAHAHAHAHAHAHAHA!!!!

Oh, and of course Harin has a circular bed with red sheets. What did you expect? XD

Oh sorry Harin, I was to distracted by the fact that Kyei said skirt