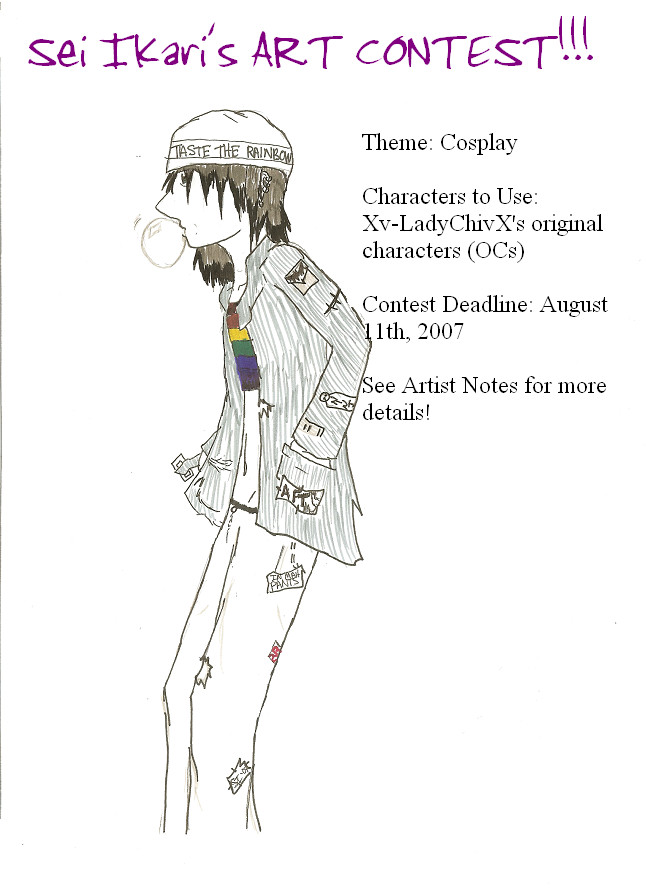 Okay, as stated above, the theme is cosplay. Participants must draw one of my original characters (characters from Clouded, The Keeper, and any other random characters I have pictures of on my gallery.) cosplaying. The deadline for the contest is from the time you read this to August 11th.

RULES:
1. A maximum of four characters per entry.
2. Characters can cosplay as someone from an anime, manga, video game, even a movie. Just specify who they're cosplaying as in the picture.
3. Yes, I will allow comics, but they must be creative and ONLY TAKE UP ONE page (ie one submission on FAC).
4. No using cosplays I've already put my characters in. This means NO drawing:
-Faine as Sanzo from Saiyuki
-Nicholai as Squall from FFVIII or Goku from Saiyuki
-Kyei as Shido from Nightwalker or Gojyo from Saiyuki
-Diana as Hakkai from Saiyuki
5. Yaoi, yuri, and cross-dressing are acceptable. Did I even need to tell you all this? XD
6. When you've completed your entry, put in on your FAC gallery and send me a PM in my profile telling me you've submitted it.
7. I will announce the winners of the contest sometime the week after the deadline.

The winners will be chosen based on three things: creativity, accuracy, and art quality. However, I will mainly be looking at the first two, creativity overall. So even if you're not the best artist, give it a shot! You never know what could happen.

Please leave a comment here if you wish to participate just so I can keep track of who's in the contest.

Keep it clean, and good luck!

ummm i want to enter but how do i show u my photo?

send me the link to the picture in a message on my profile.

The jacket's probably gonna show up in the comic XD

XD YHAHHAHA!!!! YOU SAY KEEP IT CLEAN, BUT YOU KNOW I'M GOING TO SUBMIT SOMETHING WITH YAOI IN IT!!!!

Well, I just meant nothing that would get you banned from FAC. Yaoi is TOTALLY fine with me >:3

*Does the happy dance cuz this is Bio-Kun's fourth contest*
WHEEE!!