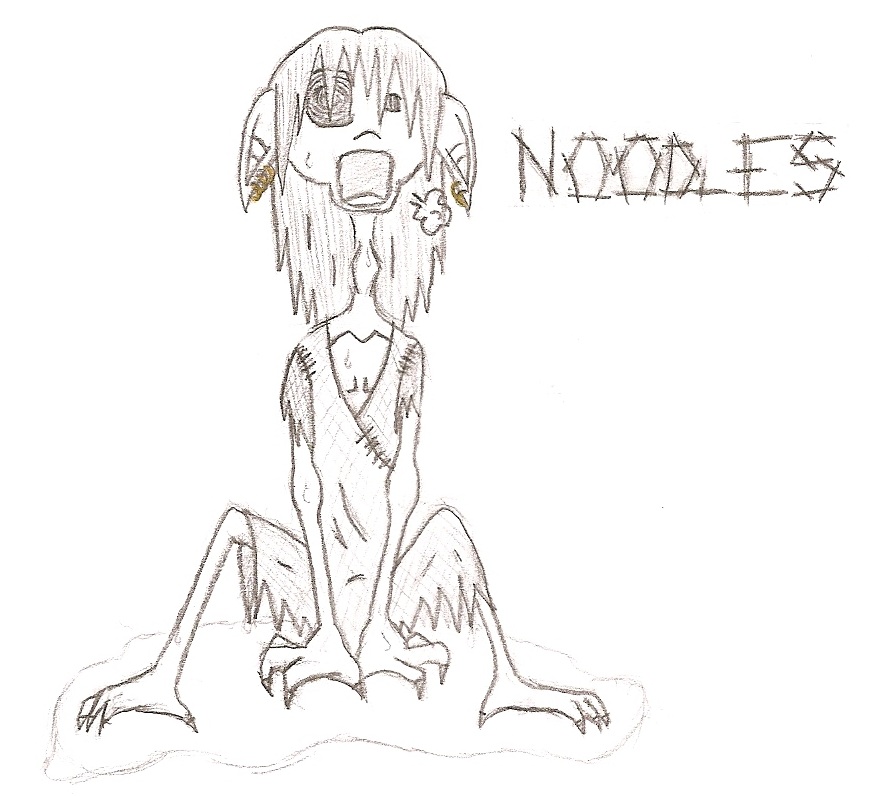 CHECK OUT MY DEVIANTART: JAWYAW.DEVIANTART.COM

So I realized I haven't said a thing about my new account. >w>'' Oh, and FYI, I don't upload crap there that I don't like very much, only the stuff I'm proud of. :3

Anyway, let's talk about the picture. Say hello to my OC Noodles, everybody! Ain't he adorable? ^-^ I made him during class, if I remember correctly.

Name: Noodles
Gender: Male
Sexual Orientation: Asexual
Age: I don't know, he doesn't know. Who knows?
Species: Chtylera (yes, I made that name up on the spot without thinking it through)
Personality: Naive, curious, happy, trustworthy, helpful, forgiving, positive.
Likes: Making friends, fish, new things, etc.
Dislikes: Sharp objects, blood, dogs etc.
Other stuff about him: Doesn't know about modern technology, he's living deep in a forest which he has not yet leaved (since he thinks it's endless). Talks like a human and moves like a human. Acts like one too (his spieces has interacted with the humans for a really long time and therefore the Chtylera eventually began acting, speaking and moving like the human spieces).

If you have any questions about him, don't be afraid to ask!

BECAUSE DEVIANTART IS AWESOME AND I'M TOO LAZY TO POST THE SAME PICTURES ON TWO SITES! XD

but, you could only upload the stuff you don't like here!

you are quitting a website, and your afraid of getting ashamed?

Okay, I get your point. I guess I could upload some stuff here when I feel like it. ^^'

and we both win! YES!