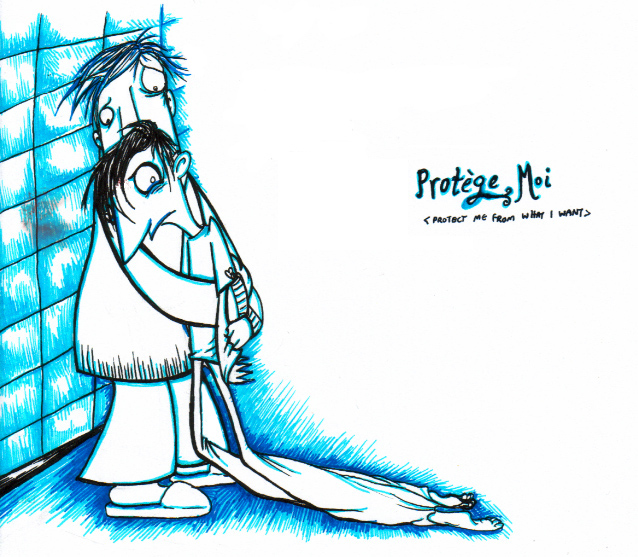 I'm doing BoydxFred for the Fanart50 (http://community.livejournal.com/fanart50/profile)! It's really fun, even if the pairing is obscure and not to many people's tastes. :P

This picture is for Prompt 18: Cold, by colour and by nature. I drew it when I was in a really awful mood, hence the "emo"-ish theme. D: Listening to Placebo's "Protège Moi" did not help to lessen this theme or my mood. It's a lovely song, though.
I've always been intrigued by the simple fact that Fred is so much of a loser that he considers sanity to be boring. Once you banish Napoleon, Fred returns to his listless state, bored in his own mind. He appears semi-dynamic later on, but it always makes me wonder... what sort of guy seems to prefer insanity to normality? [Well, all of this pondering, on top of the fact that Fred was straitjacketed, which is either because he was a danger to the other inmates, or to himself]

I was originally going to use the blues in this picture to assist in photoshop, perhaps to make good use of the smudge tool. But I liked the effect as it was so much, that I decided to leave it as it is. The little reddish smear was added in photoshop, as you can't exactly achieve much transparency or subtlety with textas, but that's all.

Fred Bonaparte and Boyd Cooper are (c) to Tim Schafer and Doublefine and people that are not me.
Protège Moi belongs to a nice little band named Placebo. D: They're not me, either.

YAY! SAY HI TO ALL THE OTHER NICE PEOPLE IN THE EMO CORNER FOR ME. :D :D :D :D
I wondered that too. That whole "Disorderlies" video disturbed me greatly, especially since Crispin does that same effin' creepy laugh that he does if you tickle him with a crow feather.
He's probably hiding somewhere, plotting everyone's imminent murder.

Aww poor Frank, I want to be crazy too.
Thanks for that EMOtastic picture I'll just be in this corner cutting myself. Really nice colour choice too(Colour with an u will not surrender)
In after your pondering (so this isn't all out of context) one thing I have always wondered, what exactly happened to Crispin after Frank chased him away I never found him again after that.

Oh yeah, I coloured that picture of Mikhail and Maloof you put on DA (I think it was called Forbidden)
And I tried to colour the one of Elton outside the "big hotel just for ladies" but it died horribly.
OH WELL
NEVER GIVE UP AMIRITE

Thanks! :D I like Fred's cowlick oldstyle hairdo, too. :3

How AWESOME! :D I'm glad you did some colouring on my TERRIBLY BLAND black-and-white linearts, it makes me all fuzzy inside. D'aww!
*Puts on Napoleon!hat* YES NEVER GIVE UP! FOR THAT IS THE MOTTO OF A TRUE LEADER!


lack of sleep helps the crazyness...

I've heard the Emo corner is quite popular every now and then.
TRY THE JACKET GUN. I'VE HEARD IT CAN HARPOON A STRAY GARMENT FROM FIFTY FEET!
Oh, and, thanks!