Rába-MAN 831 with a reefer trailer

Rába-MAN 831 with a reefer trailer 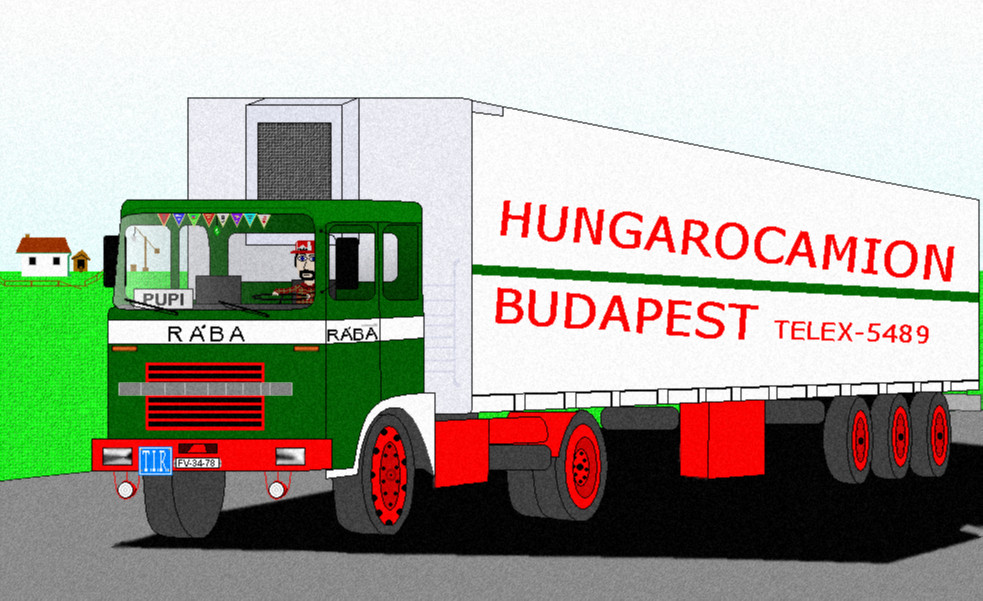 I was busy last month, and I couldn't submit any drawings, but now I'm back with this picture.

It is a Rába-MAN 831, that was made in Győr, Hungary, from 1968 to the early eighties. In a proper sense, it was a modified MAN 15 truck, but it had many own-made parts, for example its engine. Most of them were bought by Hungarocamion, that used to be the biggest conveyor company from the sixties up to the early 2000's.
In the socialist era in Eastern-Europe, truck drivers of the company could legally go into the countries of Western bloc more times in a year, and returning to their home country, they brought many western hot goods that hadn't even existed in Hungary (like Coke or different body lotions). Thanks to them, many brands became known before the fall of socialism in Hungary (1989).

ALOHA!!! Go to my profile and look up the story ' Yona Fate " and what Im doing is having a 'Add-on Story contest'... Email Me @ jakeb93@gmail.com with the next chapter all written out and if I like it I'll add it. ( But the girls name must be YONA ) I will except somebody new every chapter but if i realy like your writings I may give you more than one chapter to write. Hope All will be Fun!!!! SO START EMAILING ME THOSE CHAPTORS!!!! Adios!!!!!

Wow, cool! One of your best pics ever! Nice colors and bg, and the driver is funny too! Sorry, I haven't been on for a while, I've got a lot of studies lately. I'll try to post something though. Anyways, nice job once again!:D

You're welcome! Yeah, I was busy too last month, this is my first pic since the two Ikarus pics that I had submitted on the autumn holidays (if you haven't seen them, you can check them out in my gallery).

Cool truck! I like the way you've drawn the cab, with all the details. I love those litter banners on the windshield ( similar are still popular among Bus drvers in Poland). Good job!

I remember a game called "4x4 Trophy" wher the player was able to drive a military Raba truck. I've also seen an old, Hungarian truck in a tractor museum in Mezőkövesd, but I wasn't able to identify it.

Thanks! Well, I haven't been in Mezőkövesd yet, but it must be a Csepel or a Rába, as these two brands were known for their trucks.

You're welcome. I've searched for Csepel and I've found it! It was Csepel D344. Thanks for help!

Awesome truck, man!! I love it!! I've never seen trucks like this before.