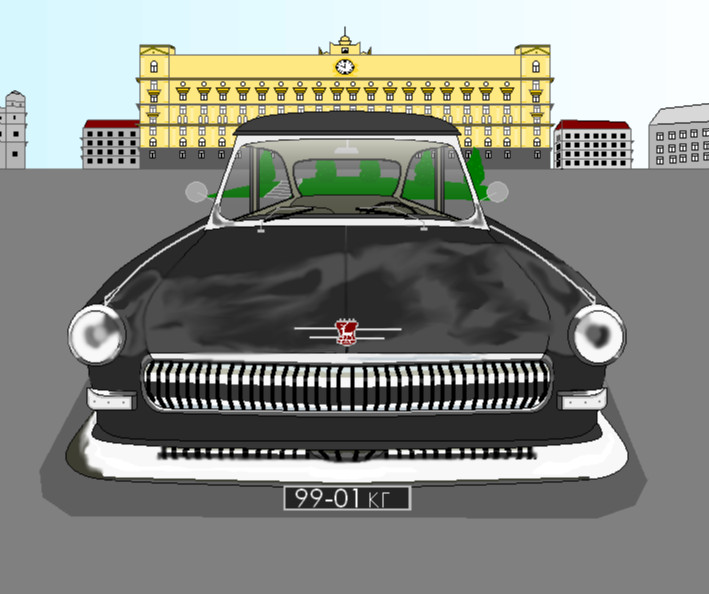 The GAZ M21 was a luxury car made between 1956 and 1970 in Gorky (today Nizhny Novgorod). It was the first GAZ model to carry the name Volga. The car was available not only in the countries of the Eastern Bloc, but also in some countries of Western Europe, thanks to its style which was similar to American cars of that time (because of that, it was criticised due to having similar front of Ford Custom Mainline), and also the prize, that the car won on a contest in Brussels.
It's already from the 3rd series that can be seen on the picture. In the Easten Bloc, the car was mainly used by governmental bureaux, including the KGB, what the factory made a special edition for, under the name M23 (that car was almost the same, except it was powered by the V8 engine of GAZ-13 Chaika). That's why I drew the headquarters of KGB into the background, which is, as far as I know, still used by the secret agency SVR.

Thanks alot! Anyway, good to see you here again ;)

Wow! The legendary Black Volga which was abducting little kiddies! I love the angle, reflections and those cool, very detailed buildings in the background.

The funny fact is that they've produced Scaldia Volga in Brussels. It had a diesel engine.

Thanks! I wonder of it, because I had thought that those cars were also built in Gorky for the Western market, but I've looked it up on wiki, and you're right, they were assembled in Brussels. As they say, you can learn something new everyday :D