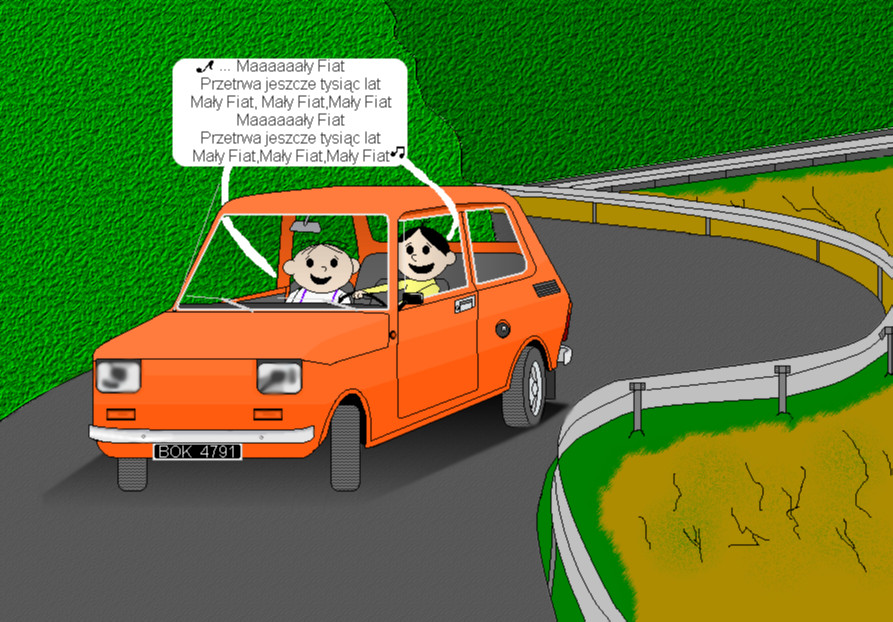 As it can be seen, this picture features probably the most notable symbols that Poland is known for: the cartoon Bolek i Lolek and the car Fiat 126p. It's Bolek who's driving an early-version of the car and singing the song "Maly Fiat" by the band Big Cyc with Lolek.

About the car: the car Fiat 126 is a small city car that originally was created to replace its predecessor, the Fiat 500. Its was introduced in 1972 at the Turin Auto Show. One year later, the car was produced under license in Poland where it was made as Polski Fiat 126p. There it became a "people's car", as it was affordable for the worker class.
As the time went on, many modifications were done on the car, but the most notable one was in 1987, when a brand new model was introduced called 126p BiS (featuring a new water-cooled 704 cc engine and modernized interior).
It's popularity proves that its production ended in 2000, more than 20 years later when it was canceled in Italy.
During its runtime, more than 3 million cars were produced, and was exported not only to the countries of the Eastern Bloc, but "behind the Wall" as well (to Australia for example, where it was sold as FSM Niki).

What are they singing?
Is it a song to praise their beloved little car?  ;-)

ha ha! this is very optimistic! :D
Thanks for your translation.

You're welcome! ;)
I guess it is it's meaning in large, but you can ask Teejay as well :D

It's OK.   Your translation is relevant and looks fine!  ;-)

Amazing! it really means much to me because both of those things came from the city where I've spent my childhood - Bielsko-Biała. Both PF 126p and Bolek and Lolek become symbols of the city.

Bolek and Lolek were extremely popular and appeared on almost every product (ulicensed, of coures). There was even a Bolek and Lolek cafe in Bielsko. I still visit their home studio from time to time - they've got their own cinema hall which plays some obscure and rare movies.

The car, of course looks great, my Grandfather had almost identical one. I gues it's 78 or 79 model, because of the lack of Polski Fiat sign and the right mirror. The first models lacked both mirrors and had only onw windscreen wipers XD

Again, Thanks for the picture! :)

You're welcome, I'm glad you like it :D
BTW, I was hesitating a lot whether the license plate is identical to the real ones from that region (I mean Mala Polska), because I could find out there was three kinds of it: the one starting BO, BB and BL. Did this mean anything back then or all of them stood for Bielsko-Biala and its neighbourhood?

They all started with B and it indicated the city. The rest indicated the year of issuing the number. My grandfather had BBB number on his 1978 car, and when I was a kid, some of the oldest cars had BBA number.

Number plate spotting was a popular pasttime among kids. Some kids even had some notepads where they wrote every number they saw.

Another funny fact is that some cars still have those old black plates - if the owner haven't changed the plate is still the same.

thanks for the info. yeah, I've heard they're still valid.
So, the B would stand for Bielsko-Biala, but would be the O and K stand for the year of issuing?

Unfortunately, I don't know, but there are guys who could tell a year from a plate.

BTW, I did the blog entry on the birthday pictures: http://wh2007.deviantart.com/#/d5f4yza

aww, thank you for the words about my pic, I really appreciate it ;) maybe I should make a profile there too. currently this is the only site I'm on.

If you ever decided to join DA, you are welcome to join our group there: http://pol-mo.deviantart.com/ It's about photos and drawings of Polish and other Eastern European cars. I'm one of the admins for the group.

thanks^^ do you remember of the cartoon? I've heard they aired some eps on Pinwheel, just like the Bunny in the suitcase?

oh, okay. I've just seen somewhere that Pinwheel was similar to Sesame street, and they aired cartoons in the breaks