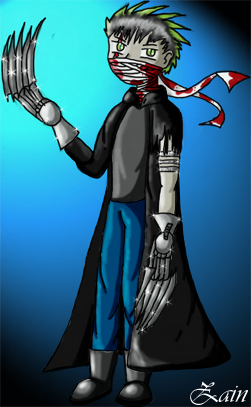 Taking a break from the Jak and daxter related stuff. I am moving towards teen titans for a while. Yes, Zain is my OC for jak and daxter, but he is also my OC for teen titans. Kinda weird to have sort of the same character and two different stories. Oh well I was bored. Oh yeah, in the pic he looks like he's leaning a bit..didn't notice that untill it was too late. Oh well, any comments?

Name: Zain
Race: Human/Death Demon
Gender: Male
Birthday: October 13
Occupation: None
Hair color: Black with acid green tips
Eye color: Acid green
Scars/cuts: long virtical red scar over his right eye
Clothes/stuff: Black coat, black shirt, blue pants, blood-stained bandages, three silver arm bands.
Other: In place of hands, Zain has long metal claws.
History: Zain lived and grew up in a parallel universe. His father a great powerful Death Demon, his mother a human sorceress. His mother died when he was only five years old in an unfortunate accident that involved a powerful spell that went wrong. Zain was left to live with his father. He did what his father told him to do, if he didn't the "punishments" were terrible. One day Zain decided to explore outside his home against his father's orders. His father caught him. The punishment? Metal claws in place of hands. After getting those claws, Zain left his home again, using the magic he had enherited to take him to a differnt place. That place just so happening to be Jump City. He's stayed in Jump city ever since, having a few run ins with the teen titans who think he's no good.

Note: cruddy history, but eh who cares right? oh and erm..Jump City is the city the titans live in right? I always forget..

I don't own the titans or any titan-related things.
I only own my character Zain

dude it's alright I like your picture still. With or without referance it really doesn't matter =D

Whoops.....my picture is not the least bit accurate(aside from the hair). I should have had a direct reference, huh.....?

Wow I'm glad you like my character XD. The metal claws are shiney and the bloody scarf/bandages was a random add-on. There will be more pictures of him coming..right after I stop going crazy with drawing ottsels.

This dude's awesome! I love the metal claws and the bloody scarf! I hope to see more pics of him

That is so cool now I feel like making a character for teen titans your character is so cool and also the Profie he seems the type who would match with Raven!!!


They would be a good couple^_^

3-D ish? Awesome! I guess he has an interesting history. Wow what a strange coinkidink. Oh well lol XD Thanks for the comment