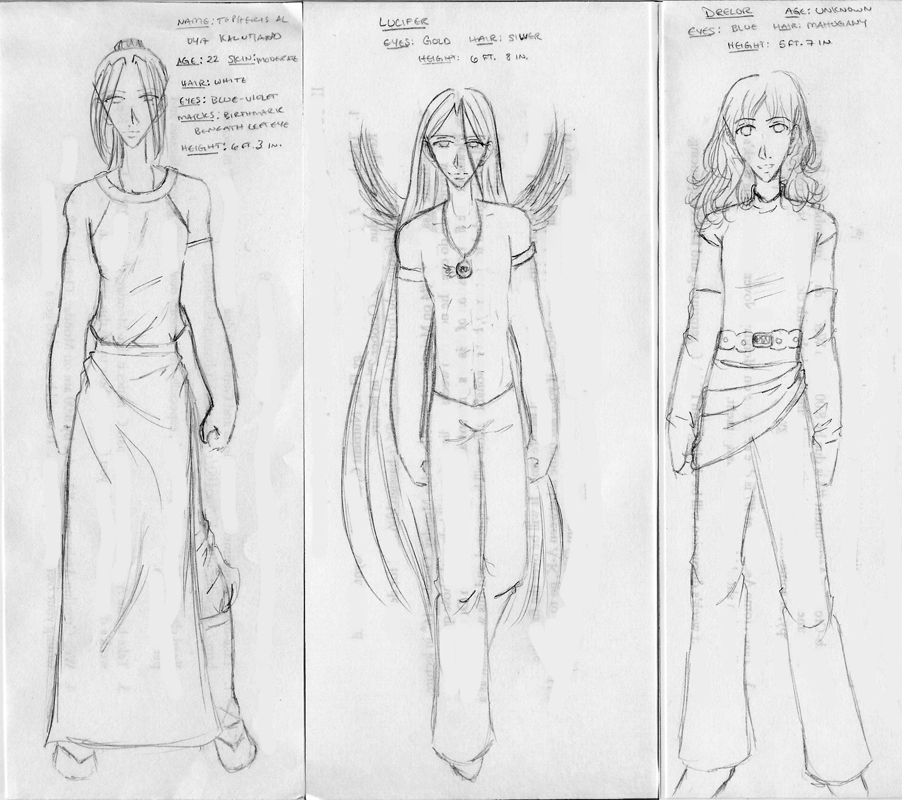 Alrighty. These are a few of my characters that I've been drawing over the past couple of weeks on the back of assignment sheets that I've recieved from my bio T.A. ^_^;;

Anyway. Some new charas that I haven't drawn before, some old charas. So in case you can't read my handwriting, I've included more info below.

From left to right:</u>
Tepheris al dya Kalutiano (aka Kal)- 22 years old, white hair, blue-violet eyes, 6 foot 3 inches tall. He's a character that I've recently created. I've been bouncing ideas around in my head how to use him. I really like him as a character, and I need to build a story around him. ^_^; Which.... is probably not the best way to do things, but whatever. I like him. He's a kind of distant person, tough exterior, very honorable, and straightforward. There is no gray space to him. The world that (I imagine) he lives in is kind of a desert place with scattered oasises (oases? oasis? I dunno.) and wandering tribes. He would be the leader of a tribe, a kind of royal figure. And actually, I've got everything all worked out for him, except for how I'm going to formulate the specific plot so that it's original. Because I KNOW what kind of story I want him to be in, *sigh* I'll work on that later. So yeah. That's Kal.

Lucifer: This is my long-standing character. Gold eyes, silver hair, alabaster skin, 6 foot 8 inches, he's the fallen angel, King of Hell. A very evil, seductive individual who is dangerous and manipulative, of course, the Father of Lies.

Drelor: Another one of my long-standing character who I feel, personally, has gotten quite left out. He's a bizarre personality, seemingly very scatter-brained with no intelligence at all, but actually quite intelligent. He never matches with what he's wearing. He'll wear clothing that not only breaks fashion laws (like wearing stripes and plaid), but will wear 5 different layers sometimes, mixing colours, time periods, and gender clothing. He's got blue eyes, mahogany hair, and is about 5 foot 7, age unknown. He's very cheerful and crazy. And when he isn't, worry.

P.S. Sorry for the crappy editing- they're just rough copies.

thank you for being one of us,,,,yes the people who make our characters interesting and non cliche

Thanks for the comments!