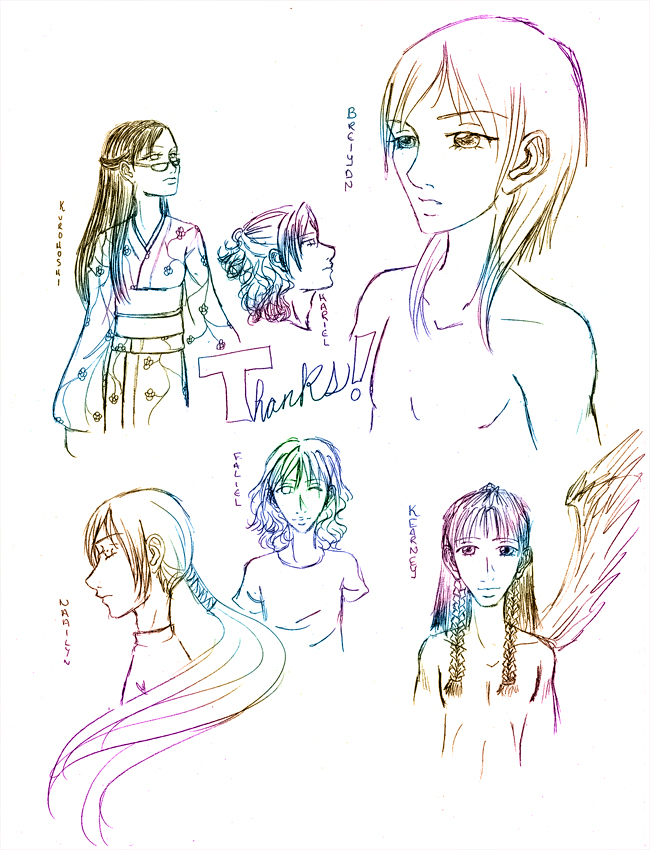 Anyway. These are some of my rather... unloved characters. I felt like drawing them, because most of them I haven't drawn in ages. So. Because I'm sure you care, here are some brief descriptions.
Top left: Kurohoshi- she was actually invented for an RP that fizzled pretty quickly and thus died after a short time. I just found an old picture of her recently and decided I liked her character design, so figured I might reinvent her elsewhere.

Top right: Breiydn- He's a character that actually belonged in the realms of Angely i Demony. I really liked his character and he's just fun to draw. I like how he is here. I've got a couple of other pictures of him in my gallery. old

Bottom left: Naailyn- he was the Keeper of Seasons. He's a dang fun character to draw. He's got two-tone hair, so it starts out green and then turns purple. I like him.

Bottom right: Kearney- He's also a character that belongs to the realms of AiD. He's a Scottish angel. ^_^ I will probably add his story as a side-story. 'Cause it's a great story.

The middle: Top is Faliel and bottom is Hariel. They're twins and the sons of Ella, also from AiD. I've got another picture of them in my gallery too. I love their character designs. I hope I'll be able to use them. ^_^


Anyway, thanks for all of your comments, views, and favourites! ^_^ I appreciate it guys! ^_^

o,o you have kids .. hahaha

xD LMAO its a joke lol

Lol, okay. ^_^; I wasn't sure, since once again, internet cannot relay tone of voice. I thought you might have been kidding after I posted the reply... But that was AFTER I posted it. ^_^;;;;