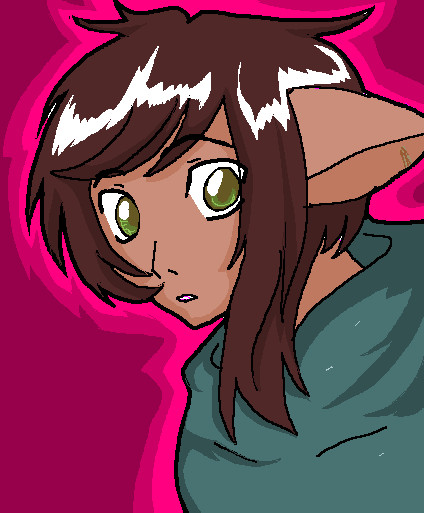 A bat-human cross, a human girl with spliced genes of a bat. no, not vampire, fruit bat. Flying fox to be specific. Along with some insectivorous species, or fishing breeds. and They used specific genomes from a already hybrid being, crossed it with an animal, and some time later, she was born.

From that point on, her life was hell. Tests of all type, from blood, to physicals,sight, and hearing, everything to see her limitations. At age six, she was found by an organization that was against the testing, and cruelty to Animals and Humans.

She was adopted by her father, (biological, and unknown donar to biological materials). She doesn't fight, because she never needed to. Her only defense/offense is her voice, which can go up octaves to disorient an enemy. She had wings, that come out her back, like an extra set of arms. Her flying is more for leisure then escape.

Meat makes her sick, because her digestion is weak. She's okay with grains, fruit, vegetables, certain fish, and bugs (grasshoppers, and locusts are best).

Very sensitive about her ears. They're very big, and people tend to stare. She sleeps upside down, and smiles alot. Little naive, and has a few scars on the insides of he elbows. People think she's a drug addict because of the marks.

has a thing for canned foods. she doesn't eat anything from a can, but she's so amazed food can be presevered for a long time in them.

I tried Tite Kubo's style for this.