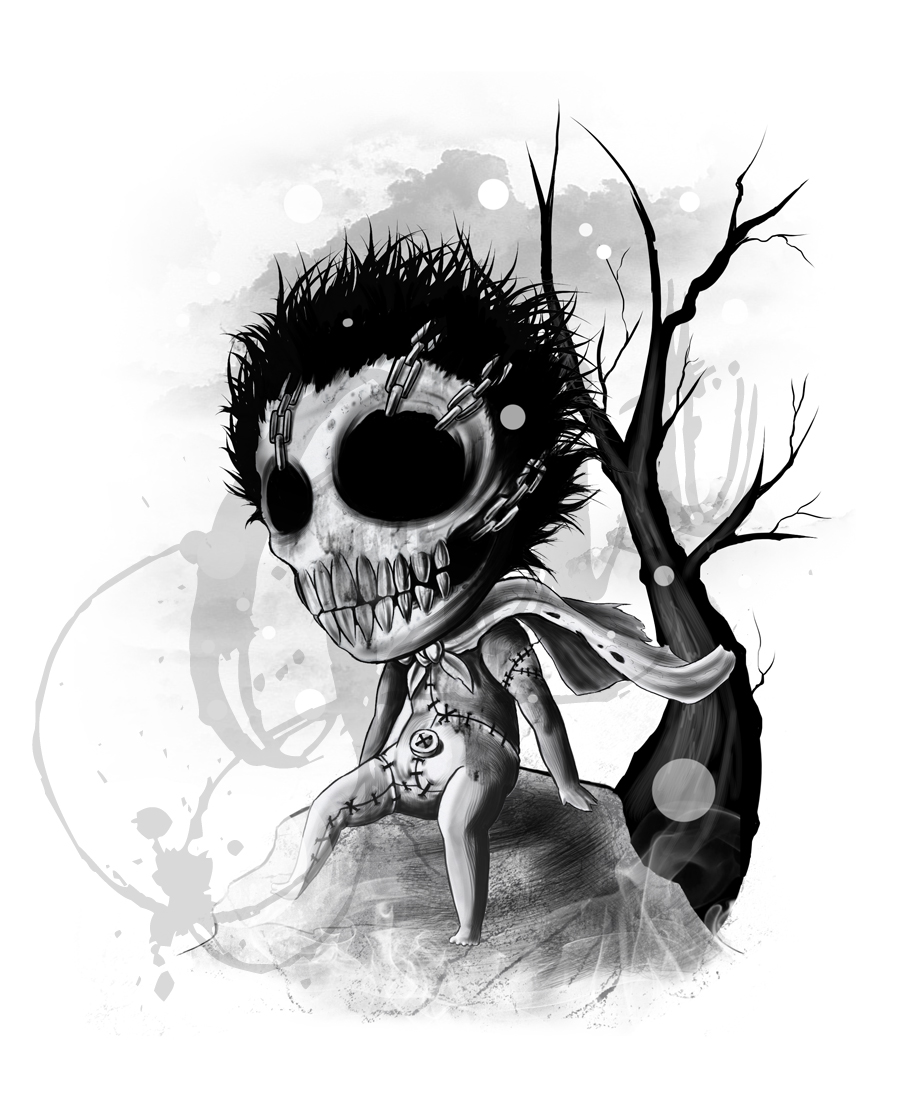 KEEP IN MIND THE STORY BELOW WAS WRITTEN LAST MINUTE AS I WAS POSTING THE DRAWING, SO GRAMMAR, PHRASES, DIALOG- NONE OF IT IS PERFECT.

He wasn't a cute toy, in fact he was quite scary. But he most definitely the nicest. But all the other toys never could see past his ghastly appearance. They all ran away when he came near. Even his owner, after a while became tired of looking at him and threw him under the bed.

Of course, Scuzzle knew he wasn't pretty like the doll that pranced on top of the music box whenever her key was wound. Nor was he strong like the G. I. Joes that trained beside the toy box.

But that never bothered him. He would always sit at the foot of the bed, watching the other toys play about when their owner was away at school.

One night, after the boy and other toys had fallen asleep, Scuzzle crawled out from under the bed- his usual routine, he wandered around, collecting little things like lint or crumbs. Silly little things that he fancied. He had quite the collect by now. On his way back under the bed he noticed the television had been left on. Curious he climbed up the bed post for a better look. Not having really watched a TV before, he wasn't sure exactly what he was watching, but it seemed marvelous. He sat down in awe, watching as a man with a cape flew around rescuing other people and their pets.

Before he knew it, the sun was coming up and his owner beginning to stir. Scuzzle shuffled down the bed post and slid back under the bed with his little trinkets. After letting a large yawn escape his toothy grin, he laid down inside his makeshift bed fluff and stray cat fur. It wasn't long before he drifted off to sleep dreaming about the super hero. He wished he could be just like him.

Over the next few weeks Scuzzle had donned a new outlook after watching the television. During the day, he ran around with a stray piece of washcloth tied around his neck as a cape, asking the other toys if they needed assistance. But of course they just grimaced at Scuzzle and wandered off.

He stayed up every night in hopes of seeing a new episode and adventure of this amazing Super Man fellow, his blank eyes glued to the box on top of the dresser. It wasn't always on, but it never stopped him from hoping.

Scuzzle awoke the next day to a loud crashing sound. Startled, he stood up and crawled out from under the bed to seeing complete chaos amongst the toys. The were running about screaming and hollering.

"Excuse me, Mr. Bear," he stopped an old teddy bear that wobbled in front of him. "What is going on, why is everyone so scared?"

The old bear looked at him, "There's a fire my boy, a fire! The boy shut the door, we cannot get out." Not even waiting for a response, the stuffed animal shuffled on.

Scuzzle looked around. The panic on everyone's face, toys were huddling in corners while others searching for ways to escape.

This was it. This was just like something in Super Man, he thought. He tightened his cape and puffed out his shoulders, with nothing but heroic thoughts drilling his tiny mind.

Scuzzle climbed up the bed and to the window sill. The G. I. Joes were trying to pry it open, but there tiny hands were no match. They began arguing with each other.

"We need someone bigger-!"

"No one else has fingers, they won't do any good!"

"Excuse me sir," Scuzzle interupted. "But I have fingers!" He wiggled his tiny fingers in succession with his words.

The G. I. Joes looked at one another unsure of his assitance. A loud shriek rang out bringing the soldiers back to attention. Noticing the fire had extended under the bedroom door the soldiers didn't think twice to allow Scuzzle to open the window.

Scuzzle grinned wide, grabbed the windows ledge and heeved upward with all of his might. The window, slowly, but surely lifted.

"Everyone up here!" Scuzzle bellowed as he propped the window up with his arms and back.

All the toys turned their attention to the window. Seeing an exit, it wasn't long before they all began scrambling outside. Some carefully climbing down, some carelessly leaping into the bushes.

Scuzzle smirked as he watched the number toys left in the room dwindled. This hero stuff sure was tiring, he thought as the weight of the window bear down on him.

The fire had already made its way into the room, climbing the walls, licking at the ceiling as the last toy made it's way out the window.

Scuzzle looked around into the blaze that curled the wall paper. He had done it- All the toys were safe. Just as he turned to make his way out the window. He heard a muffled cry.

He hesitated, feeling the fired heat his rubbery skin. Surely Super Man wouldn't leave a toy behind! With renewed courage, Scuzzle dropped the window behind him.

"I'm here! In the music box!" A tiny melodic voice rang from the small music box on the bed stand.

He hopped off the sill onto the mattress, staying as far from the growing flames as possible. He made his way over to the table, leaping the tiny gap in between- his raggy cape flapping behind him.

He stopped in front of the music box. Grabbing at its edges, but it wouldn't open. "How do I open this?" he asked the doll inside.

"The switch! Flip it! Please, hurry!" She was frantic, but who wouldn't be in such a situation.

Scuzzle noticed the latch and flipped it. The lid springing open. The pretty doll that danced to the box's music leaped out, hugging Scuzzle with all her might! "Thank you, Thank you!"

Slightly dumbfounded and grinning, Scuzzle followed her as she climbed the head board to reach the window.

"How do we get out!?" She exclaimed, looking back at the room- nearly engulfed in devilish flames that pranced violently.

"Like this!" Scuzzle exclaimed. Once again, he grabbed the window, puffed out his chest and heaved. The window creaked upward. "Go on, go!" he insisted. It was already getting heavy.

"What about you?" the little statue asked.

"I'll be behind you!" he winced as the window slid down. "Go please!"

She nodded quickly and crawled underneath, grasping onto the ledge and jumped down into the bushes.

She made her way down the bush and looked back for Scuzzle. But he was nowhere to be seen. The window was shut. The fire looking at her from the window.

- - -
The fire was eventually put out, the boy had found his toys. Happy to have them back. He had them all. All but one...


It wasn't until after he saved them did the other toys realize what a good friend poor little Scuzzle could have been...