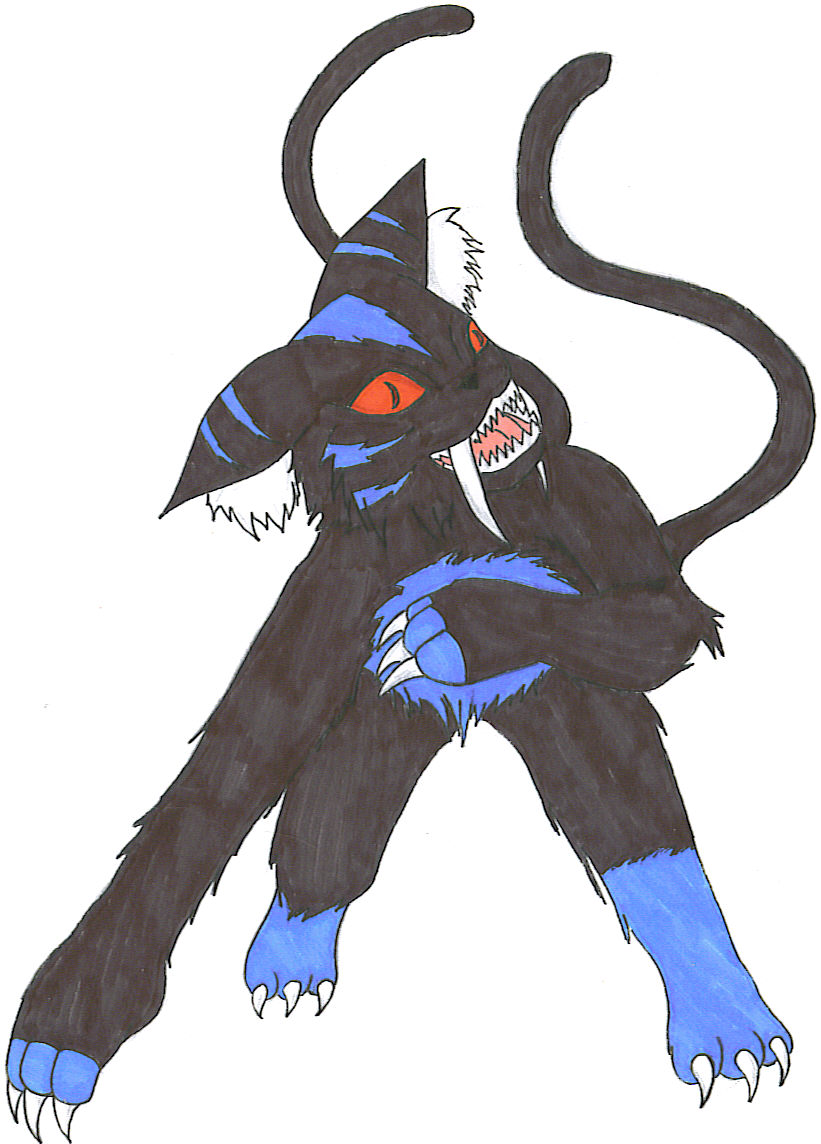 Samara as the vampire cat of Nabeshima for Wandering's contest.And yes I know she seems alot like Kirara because the cat is sapposed to have 2 tails,be a big as a horse,and have extremely large fangs.Hope you like it,comments=love
PS this was the first time I ever drew something like this (cat demon)
This is the 1st pic,her as the cat in its normal form.
.....The Vampire Cat
The Prince of Hizen, a distinguished member of the Nabéshima family, lingered in the garden with O Toyo, the favorite among his ladies. When the sun set they retired to the palace, but failed to notice that they were being followed by a large cat.

O Toyo went to her room and fell asleep. At midnight she awoke and gazed about her, as if suddenly aware of some dreadful presence in the apartment. At length she saw, crouching close beside her, a gigantic cat, and before she could cry out for assistance the animal sprang upon her and strangled her. The animal then made a hole under the verandah, buried the corpse, and assumed the form of the beautiful O Toyo.

The prince, who knew nothing of what had happened, continued to love the false O Toyo, unaware that in reality he was caressing a foul beast. He noticed, little by little, that his strength failed, and it was not long before he became dangerously ill. Physicians were summoned, but they could do nothing to restore the royal patient. It was observed that he suffered most during the night, and was troubled by horrible dreams. This being so, his councilors arranged that a hundred retainers should sit with their lord and keep watch while he slept.

The watch went into the sickroom, but just before ten o'clock it was overcome by a mysterious drowsiness. When all the men were asleep the false O Toyo crept into the apartment and disturbed the prince until sunrise. Night after night the retainers came to guard their master, but always they fell asleep at the same hour, and even three loyal councilors had a similar experience.

During this time the prince grew worse, and at length a priest named Ruiten was appointed to pray on his behalf. One night, while he was engaged in his supplications, he heard a strange noise proceeding from the garden. On looking out of the window he saw a young soldier washing himself. When he had finished his ablutions he stood before an image of Buddha, and prayed most ardently for the recovery of the prince.

Ruiten, delighted to find such zeal and loyalty, invited the young man to enter his house, and when he had done so inquired his name.

"I am Ito Soda," said the young man, "and serve in the infantry of Nabéshima. I have heard of my lord's sickness and long to have the honor of nursing him; but being of low rank it is not meet that I should come into his presence. I have, nevertheless, prayed to the Buddha that my lord's life may be spared. I believe that the Prince of Hizen is bewitched, and if I might remain with him I would do my utmost to find and crush the evil power that is the cause of his illness."

Ruiten was so favorably impressed with these words that he went the next day to consult with one of the councilors, and after much discussion it was arranged that Ito Soda should keep watch with the hundred retainers.

When Ito Soda entered the royal apartment he saw that his master slept in the middle of the room, and he also observed the hundred retainers sitting in the chamber quietly chatting together in the hope that they would be able to keep off approaching drowsiness. By ten o'clock all the retainers, in spite of their efforts, had fallen asleep.

Ito Soda tried to keep his eyes open, but a heaviness was gradually overcoming him, and he realized that if he wished to keep awake he must resort to extreme measures. When he had carefully spread oil-paper over the mats he stuck his dirk into his thigh. The sharp pain he experienced warded off sleep for a time, but eventually he felt his eyes closing once more. Resolved to outwit the spell which had proved too much for the retainers, he twisted the knife in his thigh, and thus increased the pain and kept his loyal watch, while blood continually dripped upon the oil-paper.

While Ito Soda watched he saw the sliding doors drawn open and a beautiful woman creep softly into the apartment. With a smile she noticed the sleeping retainers, and was about to approach the prince when she observed Ito Soda. After she had spoken curtly to him she approached the prince and inquired how he fared, but the prince was too ill to make a reply. Ito Soda watched every movement, and believed she tried to bewitch the prince, but she was always frustrated in her evil purpose by the dauntless eyes of Ito Soda, and at last she was compelled to retire.

In the morning the retainers awoke, and were filled with shame when they learnt how Ito Soda had kept his vigil. The councilors loudly praised the young soldier for his loyalty and enterprise, and he was commanded to keep watch again that night. He did so, and once more the false O Toyo entered the sickroom, and, as on the previous night, she was compelled to retreat without being able to cast her spell over the prince.

It was discovered that immediately the faithful Soda had kept guard, the prince was able to obtain peaceful slumber, and, moreover, that he began to get better, for the false O Toyo, having been frustrated on two occasions, now kept away altogether, and the guard was not troubled with mysterious drowsiness. Soda, impressed by these strange circumstances, went to one of the councilors and informed him that the so-called O Toyo was a goblin of some kind.

That night Soda planned to go to the creature's room and try to kill her, arranging that in case she should escape there should be eight retainers outside waiting to capture her and dispatch her immediately.

At the appointed hour Soda went to the creature's apartment, pretending that he bore a message from the prince.

"What is the message?" inquired the woman.

"Kindly read this letter," replied Soda, and with these words he drew his dirk and tried to kill her.

The false O Toyo seized a halberd and endeavored to strike her adversary. Blow followed blow, but at last perceiving that flight would serve her better than battle, she threw away her weapon, and in a moment the lovely maiden turned into a cat and sprang onto the roof. The eight men waiting outside in case of emergency shot at the animal, but the creature succeeded in eluding them.

The cat made all speed for the mountains, and caused trouble among the people who lived in the vicinity, but was finally killed during a hunt ordered by the Prince of Hizen.

The prince became well again, and Ito Soda received the honor and reward he so richly deserved.

I piled up the votes.

Congratulations! You're first place! Your prize is a picture of you and your beast, plus two requests!

I just checked out your three posts. I didn't expect you to do so much. That's very good work. I'll put you in the entry as soon as I can.