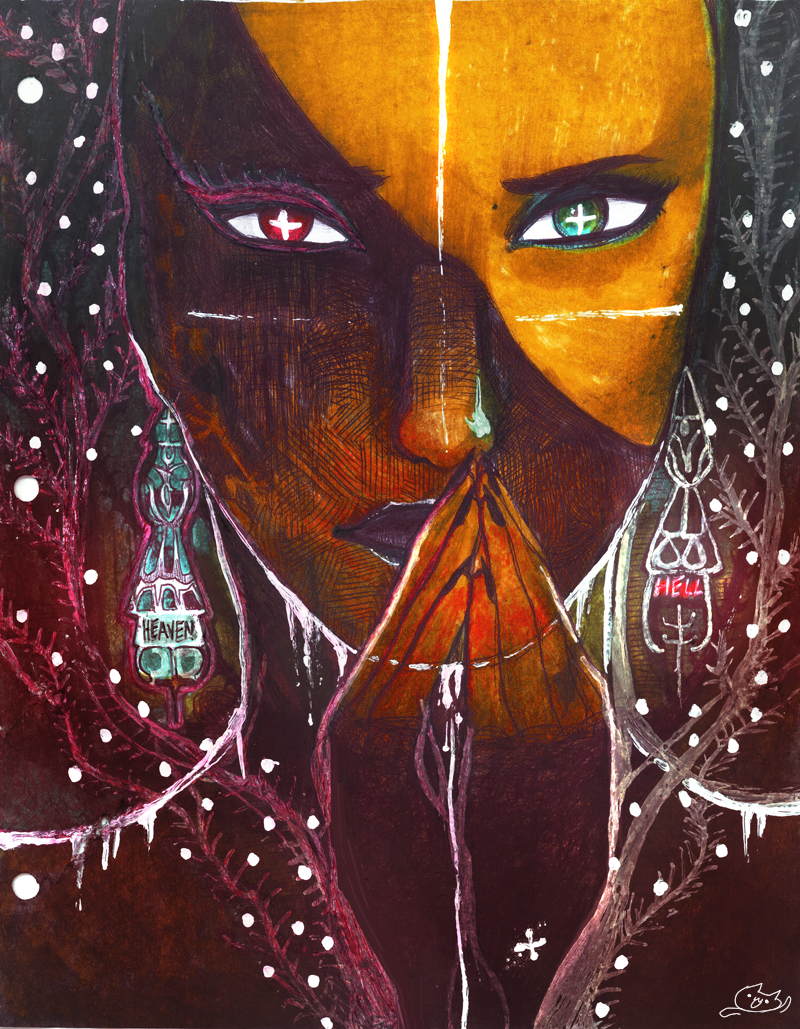 Religious Rant:
(do not read if you are religiously sensitive)

I recently listened to the Prince of Egypt - The Plagues song, and despite how BRILLIANT and well-written all the songs in the movie were, it flashed me back to when I was a child and thought the story of Moses was true. At around 11 years, I wondered how unfair it was for RAMESES to be taught to be a prideful pharaoh along with his loved adopted brother, and then his brother runs away, comes back, and destroys his whole empire with the claim that his brother has wronged his people and needs to let go of the tradition that Rameses's family had undergone for years. Moses basically stabbed him in the back after he realized he was one of the Hebrews. I understand the moral and story was good, but that irking feeling I had...how hypocritical. After killing an Egyptian slave-master, one of "his" people, Moses runs away from his troubles, meets his Hebrew people in the desert, realizes he is one of "them" now, and after having a divine FREAKING BURNING BUSH hallucination/message from God, goes back to Egypt with a "Sorry I ran away without any explanation. I am here to ruin your empire." Ramses still loved his brother when Moses returned while I felt Moses himself came back for his Godly mission, like his biblical role was the thing barricading his heart from truly admitting his personal wrongs/sins.

Why did the movie portray Rameses as the ignorant and ill-tolerable one that Moses had to maturally speak with like an adult to a child? He had every right to wonder where Moses had been, why he did not come home, and why he was so "different." Not only did Moses in the movie never actually have a deep conversation explaining everything to his brother, but it was like Moses only saw Ramses as "one of the people who have enslaved my people." I sensed such bias and loss of brotherly affection- it was so unrealistic. I am basing this off the movie, but I hope to God the biblical story actually had some decent explanations. The fact that Moses had divine intervention was an instant Game Over to me- like he was already right and there was no way Rameses could have won him over or even compromised. Either he let his whole rule crumble with the loss of his largest work force (Hebrew slaves), or he lets his adopted brother who he had not seen in years threaten him with unbelievable plagues. If I was an Egyptian leader, I would have done the latter too. Moses, in the song "The Plagues," says:

This was my home
All this pain and devastation
How it tortures me inside
All the innocent who suffer
From your stubbornness and pride...

Egypt WAS your home? Before, you were so proud to be apart of Egypt with its strong history, and you loved your royal family. They treated you as their own. All of a sudden, you treat it like this "home" is a thing of the past, something you could push farther away and replace it with a picture of the people that enslaved your people. -The "innocent that suffer" because of RAMESES's stubbornness and pride? YOU are the one that let the 10 Plagues come onto Egpyt. Technically, you are the one that threatened/was the pathway for it- why does everyone around you have to die while you STAND THERE SAFELY saying mature things like "Oh, if only you were not so prideful. Then, this would not happen."

In return for the safety, peace, freedom, and prosperity for his Hebrew people, he would threaten (and go through with) the starvation, plague, hail, darkness, and killing-of-first-borne of the Egyptian people. HYPOCRITICAL PIECE OF SH*T.

*smiles innocently* Drawn with black ballpoint pen, yellow highlighter, orange highlighter, blue highlighter, red permanent marker, white-out pen, and Photoshop dodge and burn. The hands are quite small, sorry! I drew it first, and I misjudged the proportions of the face. I truly apologize to anyone I offended!

yeah.
why did I read that.
that really offended me, a mormon.

Pixie, remember I am just ranting about a movie that was a little inaccurate from the actual story.

As long as you hold strong to your religion and own stories, you should not feel too offended about other's opinions- for they are living in a world of religious people giving their stories all the time!

EH YOU WILL GET OVER IT

Yes yes do not worry! I was just releasing childhood feelings about the movie!

OK... I am a Christian, but this is still one very cool looking picture. And I do get it with the frustration over Moses' treatment of his "brother" in the movie, and the plagues are... confusing for me. Besides this, I have a brother who is good at poking his finger into perceived divine plotholes and loudly wiggling it around, so, maybe I'm used to that. :p

That said, the movie wasn't quite on target in some ways. For one, Moses did apparently have prior exposure to his heritage as a child. For another, he was adopted by the Pharaoh's daughter, not his wife, which would've put Ramses in more of an uncle relationship than a brotherly one. Not that there isn't plenty that looks awkward/wrong, even at that.

Erm, not sure if you're good with religious-not-rants from religious-less-sensitive-than-maybe-some types. Thanks for reading, anywho.

Oh, yes, I will take any knowledgeable opinions!

Thank-you for the biblical insight. I did not read the whole Story of Moses, so it was good that you told me that without awkwardly just countering and pressing send.

I did not know it was the daughter! The mother did take care of Moses as her own son, from what I heard, but indeed, that still puts Rameses in a strange position, lol.

Alrighty. :)
You are welcome, and thank you for the gracious response.

Really? Have people never truly tried highlighters before? They almost have the same feeling as prisma markers, except they are more bold [and permanent]. -Maybe it was all that ink I put in the background that made the highlighter look unbelievable. The picture was soaking when I was done with it. I ripped the picture a couple times because it was so soggy.

TOFU. WHAT IS WRONG WITH ME. BEING SERIOUS IS NOT FOR ME.

Yeah, you should use thicker paper! Why did I not think of that?

GOD DANG IT STOP MAKING ME LOOK LIKE AN IDIOT

WOW!!! The colors...EEEEEEE!!! The eyes are really beautiful^^ I cannot believe you used highlighters on this, it don't even look like it. The purple color is so pretty. It's not too much and not too little^^ You are the master!

Yup! You know that really dark background? -I found an ink pen that had stagnated ink (even though I knew there was ink in there, it would not come out), so I took apart the pen and used a paperclip to dump the ink all over the background so I could white-out the "tree" in the back. The ballpoint pen outline was probably the hardest to do. Everything else was pretty fun!

You should color with highlighter sometime! You would be great at it- for you are also quite the master at using household tools!

Also, have you seen this incredible ballpoint artist? GOD GOD! Now that is what I want to get to one day! http://vianaarts.deviantart.com/art/Redhead-Girl-Ballpoint-Pen-310870595

Haha use that imagination and take apart a pen lace lol I saw that pen drawing and yea....O_O wtf is that even possible!!!!

Thank-you! *rubs fake beard* I am very interesting. Are you interesting?

I THINK YOU ARE INTERESTING.

Thanks Lizzy-Victor hybrid! I wonder if Victor has your same indifferent feelings of religion? I feel that really helps to see things in a more objective view...and maybe your relationship is the similar-interest type.

GAHHH I do not know! Why is it that every time I reply to comments, I go on tangents on everything but what the comment was talking about!

Anyways, I know! The music, voice-acting, and music in general were incredible! DREAMWORKS. ;U; Apparently, the guy who did Voldermort in Harry Potter voiced Ramesis- that is what I read somewhere. Oh my goodness, that is awesome. NO WONDER HE SOUNDED SO EVIL!

True, it is just an unrealistic biblical story. ;~; I guess I just felt uncomfortable/sad that SUCH AN INCREDIBLE MOVIE had such a strange moral. I honest-to-god thought the movie was based off a true story. I was like, "WHYYYYYYYY!!!!" I suppose I was just letting go of childhood fears and thoughts in the descriptions. Thanks a lot! I was scared you would actually be religious, and I do not want to hurt your feelings.................meh. I would not care afterwards. P;

Thank-you! I added the crosses in the eyes afterwards after thinking the picture looked a little empty. ;) It is a good thing I put them in the right place!

and i also love the textures

Thank-you! The textures may be the pieces of light white paper that I missed with the highlighters.

Oh, er, I mean, yes! Those textures! I totally did those on purpose!

How could you did that on purpose?Looks great!!