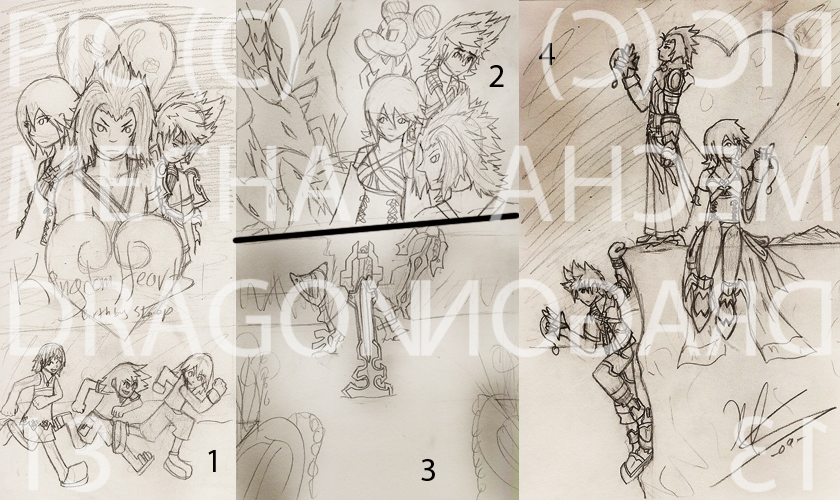 yeah, i watermarked the SH*T outta this one. Critic got me paranoid. DARN YOU, CRITIC. *shakes fist*

but yeah. I've been meaning to make a fan-cover for Birth By Sleep since the english cover art hasn't been revealed yet (if they even change it from the japanese one, which i really, really like ._.)

SO HERE WAS WHAT I WAS THINKING FOR EACH OF THESE:

1- I was trying to include the Sora-Riku-Kairi trio as well as the Terra-Aqua-Ven trio, and this was what came out. BbS logo goes in the middle, SRK running around the beach at sunset, TAV with the KH Moon behind them.

2- Tried to do something like the japanese cover, but i decided to add the Unversed into it. it's less action-y too ._.

3- BASED OFF CRITIC'S IDEA! thank you vewwy much, friend. TAV's keyblades stabbed into the crossroads at Sunset Horizons. there was supposed to be more stuff above that, but idea 2 stole that spot ._.

4- Tried to go for something like KH1's cover, but failed. I kinda like this one more than the others, even though i have no idea why Ven's hanging off the cliff ._. might move him somewhere else later.

HERE IS WHAT MISH NEEDS YOU TO DO. Mish needs to know which idea is the best and why, or if you feel mixing and matching elements from each idea would make it even better. if your idea is the one i use and i'm satisfied with it, i'll make you a gift!! :D so plz plz VOTE!!!

oic2. i also like Critic's idea, but i think it looks better with Ven being emo in every pic XD

it's called a "watermark" Chris XD and it looks pretty obvious to me ._.

Good ideas! I like mine the best :3 Gives it an ominous feeling.

mishy wants to know WHY they're good, so she can like, make them better. whaddoya think of them?

well right now, they're just sketches. The keyblade one gives a more "what is this?" feeling, plus, hey, it's KH 3, amirite? Three keyblades! Ho ho ho. Your whole "design" skill is very nicely high, though you need to smooth everything out, color it, blah blah blah.

ok, THATS better. btw, BbS is NOT KH3 XP its a prequel, slly.

noooooooo.... because COM would then technically be KH2 :/

OK WHO CARES? and Nomura said there's another KH title in the wooooorks <3

i have nooooo idea..... he won't say anything beyond "another project" D:

I heard it was Keyblade Wars. :/

ah, but unless it comes out of Nomura-sensei's mouth, it's not true :D

its as if you heard Terra was actually Zack! is it true? nooooooooooooooo... XD

Don't call Nomura that ever again, or I'll come over there, and beat you senseless. DX

*totally thinks that Mish should stop using wapenese terms, or else she'll start watching anime in japanese, and saying ""*

hey, anime in japanese is better, mostly 'cuz it's not STUPIFIED like Sonic X was, and NO, I DONT USE TERMS. only for LULZ. 'cept for honorifics, those are just to annoy people X3