me and my fantasy

Home » miss_san » Pictures » me and my fantasy

me and my fantasy

me and my fantasy by miss_san 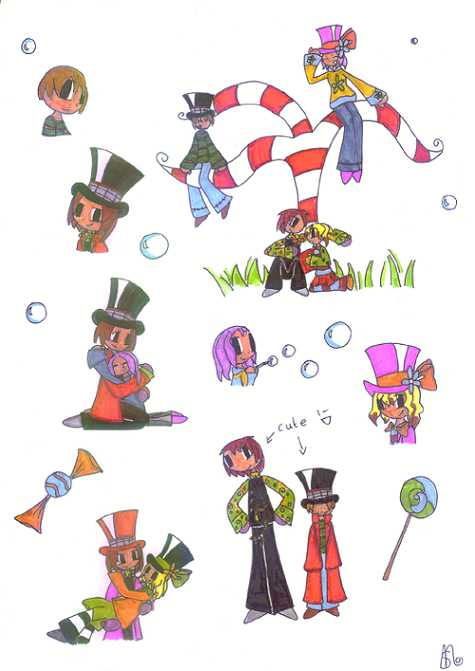 some small drawings of catcf and me. First I wanted to call it: the chocolatier, the heir, the girlfriend and me, but that was to long=P. I shall begin to explain above on the left. First you have charlie and onder charlie is wonka. Than next to charlie and wonka you have a candy tree with me (with Carol's hat on my head)) and Charlie (with Wonka's hat on his head) in it and Wonka and Carol under it, while Wonka gives Carol a flower. Under that little drawing is me and Carol. Next to me and Carol on the left is Wonka embracing me. That's something I thought of on vacation in Belgium: The boyfriend of my mum (my parents are divorced) wasn't very nice to me (he never is) and I was sad because he was angry at me (I can't stand if people are angry at me=( ). My mum said it was wrong of him and then she went to him to talk and then she just forgave him again and they were just kissing again (I'm going to throw up). So I was feeling a bit lonely than, so I wished that wonka was there at the moment embracing me and helping me. But because he wasn't there (pity) I drew it. I'm nuts, I know=P.
Well, back to the drawing, under that embrace is a drawing of Wonka holding Carol in his arms, I just find it sweet if someone does that=). And next to that is Wonka without his coat and hat and Charlie next to him with the coat and hat of Wonka, wich are way to big for him=)
Hope you like it, cause it was a lot of work to draw and color this O.o'

AWwwwww ill comment again cuz ur awesome!! and that request i just checked (cuz i havnt been online in a while........LONG story) has just made my day *smooches* lol

At first: thanks for adoring my drawings!!!!
Second: Ey, a request! Yeah, I'll do my best on it=)
Third: It says phantasy.....I've written something wrong again, haven't I?=P

ps- y does it say phantasy?lol

awwwwwwwwwwwwwwww this is sooooo cute. i luv ur discription. and u r sad story is so touching.. when im lonely i imagine wonka there ^^ Yes indeed it does look like you took aLOT of time on this!!!!!!!!!!! great job! I CANT BELIEVE I REPEAT BELIEVE THAT NOBODY COMMENTED THIS! CMON PPL! hey! this inpired me! can you draw me and wonka like this together? as a request? i have blonde hair.like really blond....down past my shoulder blades almost ot the center of my back. i have long bangs bordering hte side of my face. i have blue eyes and im pretty tall.! OH GO DPLEEEEEEZZZZ^^ ill luv u forever! i already adore ur drawings! thnx! lol