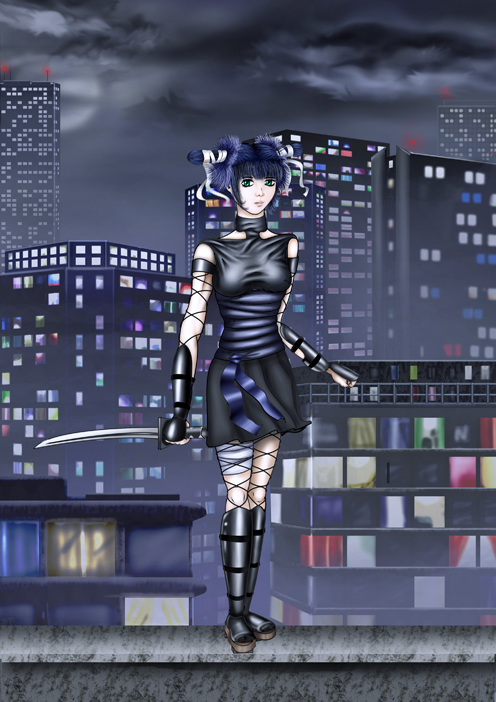 Hi! This is a random drawing that got colored and a bg...Let me know what you think!<br />
Thanks!

You're so good in coloring! I really suck at coloring, gotta practise!! The backgroung sure looks hot! So does her hair and clothes texture!

Hmm...Looks like a ninja to me.Very modern style of clothing,good twist.But female samurai and ninja don't really expose lots of skin,but your background is cool.This could be a modern ninja of sorts,but a samurai would have a longer sword.

definately excellent, though the multi coloured windows are curious. ^_^

She looks like more of a ninja than a samurai to me, but then, she could be a samurai pretending to ba a ninja so that her enemiea will not recognise her.

It would be clever of her to do that, and if she managed to get around without people attacking her for being a ninja (that's what they think, hah!) then she could get back to her people safely!

But what if they recognised her as being a samurai, but decided that pretending to be a ninja was too sneaky for an honorable smurai to do, in fact, it's almost like a ninja thing to do. So they declare her a ninja traitor and chase her out, thus forcing her to live the rest of her life as a ninja to avoid both the wrath of her people and her enemies.

Little did she know that her people could care less at this point, and thus she lived in fear for no reason at all, having completely changed her ways to avoid detection, she grew lonely and eventually returned to her people to beg for forgiveness.

Until she recounted her the past several years of her life, they did not recognise her. But once she had told them, they sentanced her to death for a second time. Just before she was hanged, the cheif came to her and told her that she had done the honerable thing, and had repented for what she had done. But because of her breif traitorism, she had to be killed anyway. She died knowing that she had served her people, and that she was honorable. Her body wwas cremated, and her ashes cast into the sea.

Somewhere in there I changed tense. Somewhere else in there I turned my monologue into a story. o_O My appologies, it is a very nice picture, especially her hair. =) ...

argh!! no1 deserves to be this good! great! i luv the pics! ur art work is great.