The real death star by restless_dreamer 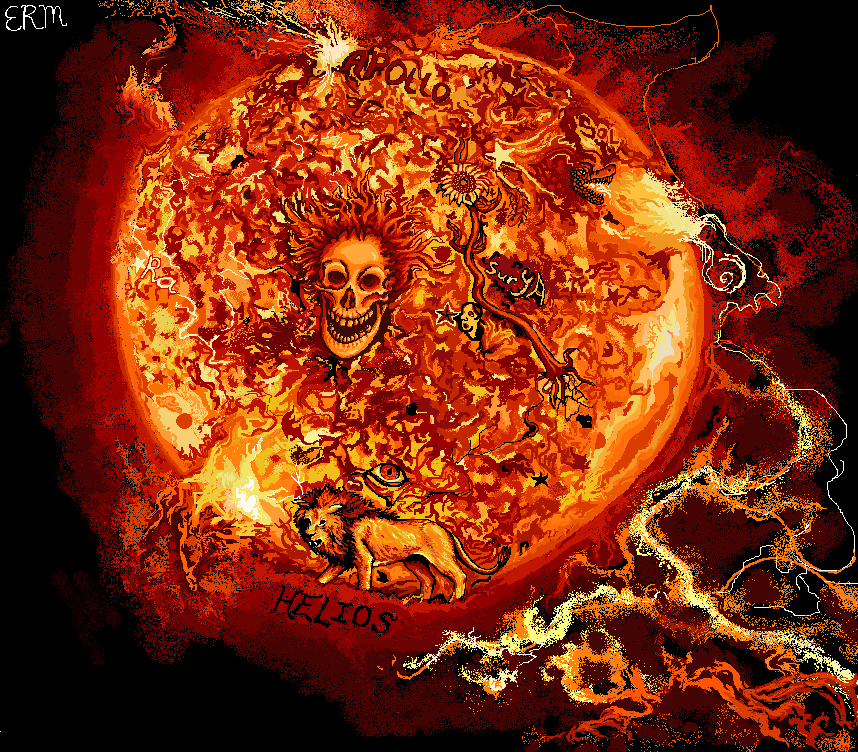 Haha well at least here’s my surrealistic view of the sun with it’s constant solar flares that might cause an extinction of all life on Earth whether it actually be by that or just the fact that it will die out someday...but that’s like what 5 billion years from now. :whew: That’s one reason I included the skull with flame hair, and the sunflower well that's pretty obvious why I added that. The lion was added as a reference to the astral sign Leo which is the only sign that is ruled by the sun. I also included some other names for the sun like: Helios, Apollo, Ra, Sol, and Surya, and there’s also 9 terribly drawn stars. Also hidden amongst this MS Paint mess is: two faces, a dragon, an eye, and two tiny red suns rising and setting. Anyway I might draw all the other planets too in the far future since I’m always interested in the universe.

Here’s some interesting facts I found on the internet that I couldn’t resist adding. The Sun is 109 times larger than the Earth. Light from the Sun travels 186,000 miles per second. Light travels over an average of 93 million miles from the Sun to the Earth in less than 9 minutes. The temperature of the surface of the Sun is roughly 10,000 degrees Fahrenheit. The temperature at the center of the Sun is believed to be 27,000 degrees. Hydrogen and helium make up over 95 percent of the mass of the Sun. The equator of the Sun takes 25 days to rotate once. The poles of the Sun take 35 days on average to complete a rotation. The Sun is about 4.5 billion years old. The Sun is believed to be half way through its fuel. The Sun is one of the largest suns found in the known universe. Sunspots are cool areas on the surface of the Sun. Major sustained sunspots are associated with ice ages on Earth. The energy contained in one days worth of sunlight could power the Earth for a full year.

Oh. My. Gosh. You have no idea how much I like thi!!! :O This is like, THE coolest picture I've seen :D I don't even know how you can do this with MS Paint, but, dude, you have some maaaajor talent! I'm totally faving this :)))

Aww wow thanks, I'm glad you like it! :) If you're interested I'm also working on Neptune right now, I could tell you when it's done.

Wow! that's amazing use of texture!
It really gets you think, and it's very educational.

Why thank you, yeah if I finish Neptune anytime soon I'll definitely add some information about that too. Hey and if this interests you, you should watch the history channel tomorrow night at seven since the Universe show is talking about the sun's dark future.

Amazing, doesn't look at all its made with MS Paint.

Thank you so much!

uWAGHHHH!!!!! Once again, from thumbnail view, I thought this was pure PS work, but it is in fact MSPAINT! You concentrate so much on those details; what an amazing talent/eye for those little things!

I love that the picture circles with flames around the skull. There are other objects like the lion and sunflower, but the skull looks the most amazing!!! *favs* GREAT WORK!!!

Hehe excellent I've fooled you again, although it should seem pretty obvious what I used since I still don't have photoshop lol, well that and anyone can clearly see where I used the spray tool. But yeah the skull is my favorite part too, hehe it's probably now in the top three best skulls I've ever drawn. Thanks again for the great comment and fav!

wow!!! ms paint can do wonders lol
you must have just really worked your tail off those 2 weeks!!! i love the lion at the bottom and all the bright colors^^ this really needs to be featured!!!!! IM FAVING!!!!

It really can do wonders, too many people underestimate what they could do with it. Anywhoo this is in a way featured or more so since I'm still the artist of the month, lol they should pick someone new for this month since I was featured for August too.. Thanks so much for the great feedback, it's especially wonderful to hear you appreciate the effort that I put into this. :)

oh that is right^^ congrats on that feature too!!! that is how i ended up seeing this art in the first place lol
ur very welcome^^ i know what it is like to work your heart out on a good drawing and this is sure one of them you got here

Awesome as always! I love the little tidbit you gave there about the sun, and all the other things you've included... I didn't know about some of that stuff, and it's awesome to hear about it! :D

Yeah it really is awesome and always fascinating to me to find out new information about the ever expanding universe. And drawing it has always been a dream of mine, anyway thanks so much friend for the comment and fav! :)

That is so sick! B) Sun ftw

Haha that's fine I knew what you meant. ;) Thanks so much for the great comment and fav!