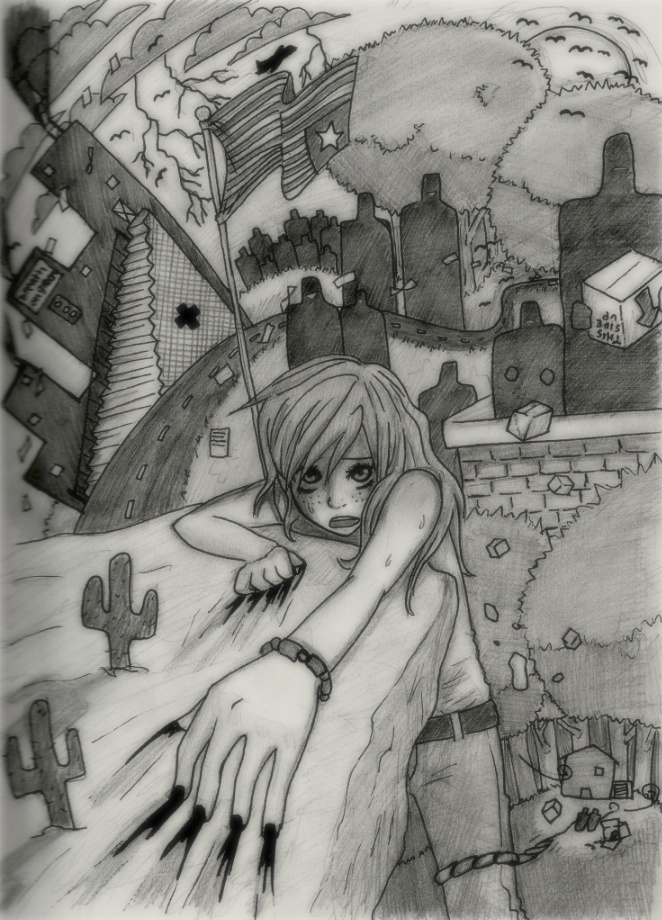 "Flying an American flag upside down is not necessarily meant as political protest. The practice has its origin in a military distress signal; displaying a flag in this manner is "a signal of dire distress in instances of extreme danger to life or property";[40] it has been used by extension to make a statement about distress in civic, political, or other areas. Upside-down flying of the flag was ruled constitutional in Spence v. Washington, a 1974 Supreme Court ruling.[41]" -Wikipedia

Yeah, it's not an exact American flag there in the picture, but work with me here.

Life is kinda not nice sometimes...

Came up with the basic idea around two in the morning like a week or so ago. It was one of those jump out of bed, turn on the light, and grab your sketchbook after like an hour of laying awake kinda times, If you know what I mean... but that's just me being weird, sooo....

Anyways, yeah. Done in pencil and my grandparent's weird "Zebra" brand pen that I kinda stole out of their office. Probably won't color it, but I don't know. The left side is blurry; I'd have to rip it out of my sketchbook to fix that so it lays in the scanner right, but, since I don't actually have a place of my own at the moment, I don't want to risk losing it.

MY GOD!!! this is amazing!!! Did you capture this with a camera? I would like to see the details more carefully, but the idea itself is great. I love that her nails are bleeding. The perspective!!! WOW!

Lol Thank you! xD Well, this was one of the first pictures I scanned after I got the scanner up. If I rescanned it I'm sure I could make it a bit more clear.

a little bitconfusing, that makes it really great

Wow, I love this!! 8D Especially how the shading defines the scenery and her. Also I like how conflicting her expression and even the world around her looks. A really incredible piece of art. ^^ *faves*

(Ah no way, that's not weird! I don't think someone can truly claim to be an artist without having those after midnight drawing inspirations! I actually get those alot. xD )

I've never had to move, but I could never imagine living anywhere else. Sorry to hear you had to move. :(

Yeah. this is probably the second big move I've made in my time, but this one's been pretty hectic. Moving a lot father away from the west to east coast.