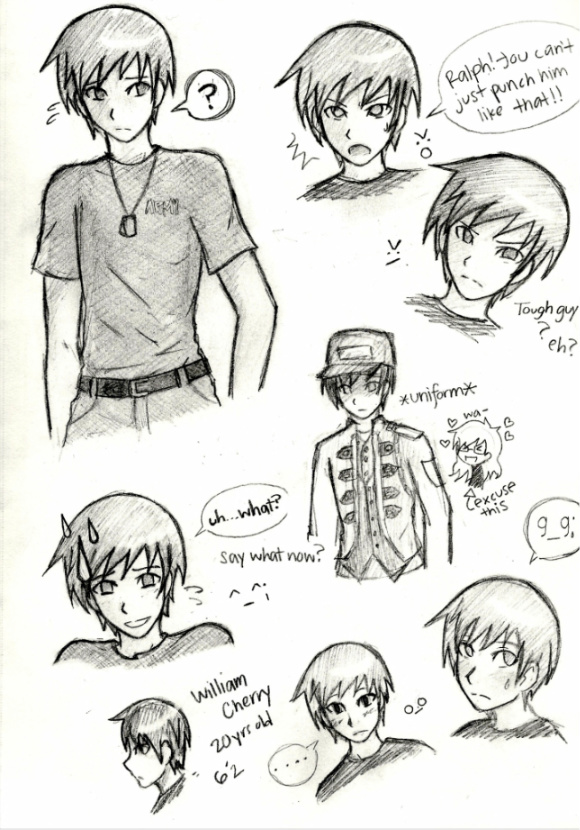 Alright, the blame is on me if Will looks a bit too girly/scrawny here. Not that he's crazy buff or anything, but this is kind of old and I still wasn't used to drawing men at all. So... yeah.

20 year old William Cherry of Savarna. His hair is light ash brown and his eyes are golden brown. Will is modest and has good morals. *nod* He was birthed with the intention of having a character in Savarna who (along side Joseph, who I think is a probably a decent man too) wouldn't disrespect/grope every poor woman he came in contact with. And so Will the protector of women takes the stage! >;D .... and is pegged with a rock in the head by Ralph, his greatest enemy and roommate.

Despite being called "Cherry boy" by many of his peers, he wasn't always so friendly and well-mannered -not always as respectful to women. ^_^; Needless to say he doesn't drink any more and hasn't been on drugs for quite some time. He somehow managed to escape his old life as a gangster. In Katie's words, or something like it, "He's like one of those guys who went to hear Ghandi and changed his life around" Hahaha.... sort of.

Anyway, there's Will. He's not very violent, likes Coke and Chinese takeout, and wants to be a mechanic after the war ends for the sake of his car passion.

Cool character, sounds like a rough past though. D: I love his hair btw *faves* ^^