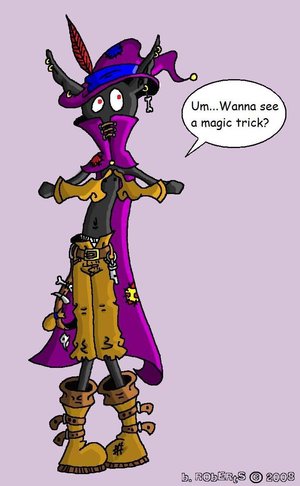 Because Em was my first Mago Magro years before I made them into a species anyway. :D

So here's just some info on him:

Name: Emerson "Em" Q. Thatcher
Age: 23
Tribe: Rutherford (who still needs a last name ^^;)
Magic skill: Sucktastic XD
Wand type: None right now
Special item: A magically possessed squeegee mop that he rides much like a witch rides a broom.
Friends: His cousin, Zebadiah, and Carl the elf.
Other stuff to know: Em dropped out of magic school when he was only sixteen because he was bound to fail anyway. Rejected and humiliated, Em set out to find a new life amongst other races. He dabbled in human magic, but found it too complicated from where it was so different from Mag magic. With a little of both skills, he was able to carry on pretty good, at least at a livable level for a Mag. He then began to use his knowledge of humans and the petty amount of magic he could manage and became a traveling magic show, most of the time conning his audience. This got him into a bit of trouble...

It turns out that one of the audience members was a powerful wizard, and didn't take too kindly to Em's tricks. As punishment for misusing magic, the wizard cursed Em with the "stitch-lip curse" where one's lips are sew shut for eternity, with only a few rare-to-find cures to reverse it. Despite the fact that the curse normally leaves its victims silent for the rest of their days as well as makes it difficult for them to eat, Em somehow managed to loosen the stitches enough to live an almost normal life style. As it's still embarrassing, though, he keeps his face hidden.

He had a wand at one point in time near the beginning of his journey, but it broke, so now he just uses his finger tips to control his magic. Between not completing his training on how to control his magic and his poor means on conducting it, Em's spells usually don't turn out the way he wants them to...

XD Thanks. :D He's being a little more honest nowadays. Sort of. XD

Thank you! I need to draw him more. XD