The Phoenix's Mechanic by sweetXcatastrophe 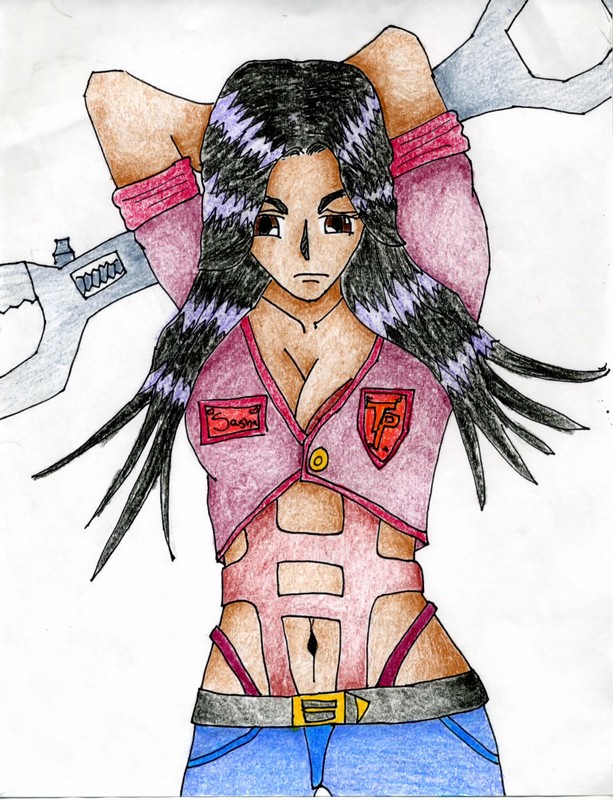 I drew this last night and I actually decided to take my time on it. Yeah there's a few things wrong with it, but I love the picture so far. Just to let you know, the giant thing she's holding behind her is a crescent wrench. I was watching Tenchi Muyo GxP the other night and I was thinking about how cool it would be to travel in space and go to other solar systems. So I came up with some characters.

She's the mechanic of the ship. And why would I chose a girl to be the mechanic you ask? Well one thing I love about some anime's is how the break the walls of sexism. Making women equal to man. (Not in all animes of course) Anyways on to the picture. Her name is Sasha, and I based her off of a girl I know named Sasha. And to those who think they know who the actual person I'm talking about, yes, the Sasha that is like 4'10. She's really short, but don't let her height fool you, she can be the biggest dog you know. No joke, that applies to real life.

And that brings up another question, why would I make her a mechanic? Easy. In high school, I think it was my junior year 11th grade, she asked me for a ride home and it was raining. And she lived freaking far from the school. So I drove her home and well basically everything was going wrong with my car and I knew there was something wrong with it, but I had no idea as to what. Anyways Sasha told me to pull over and she opened my hood, and did a quick check up on my car. And she told me everything that was wrong with it and she told me, leave your car with me tomorrow and I'll have everything fixed. And what do you know? I did and my car was running perfectly. She's not a grease monkey or anything, but hey she knows more about fixing cars than I do.

Just so you know, I don't have that car anymore. My friends loved calling it "The Death Trap"

But yeah I totally made her look hawt. haha.

Oh and btw, the space ship she's on is called The Phoenix. (Yeah not original bite me.)

WoW!!!!! this is reallt good!!! only one comment? what wrong wit peoples theses days?