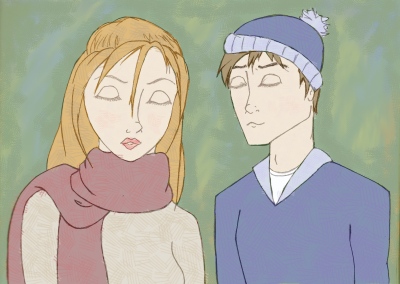 “…Supposing I told you I’d been to a place where animals can talk and where there are - er - enchantments and dragons - and - well, all sorts of things you have in fairy tales.” Scrubb felt terribly awkward as he said this and got red in the face.
“How did you get there?” said Jill. She also felt curiously shy.
“The only way you can - by Magic,” said Eustace almost in a whisper. “I was with two cousins of mine. We were just - whisked away. They’d been there before.”
…

“You mean we might draw a circle on the ground- and write queer letters in it- and stand inside it- and recite charms and spells?”
“Well,” said Eustace after he had thought for a bit. “I believe that was the sort of thing I was thinking of, though I never did it. But now that it comes to the point, I’ve an idea that all those circles and things are rather rot. I don’t think he’d like them. It would look as if we thought we could make him do things. But really, we can only ask him…But let’s get on. It can’t do any harm, just asking. Let’s stand side by side, like this. And we’ll hold out our arms in front of us with the palms down: like they did in Ramandu’s island-”
“Who’s island?”
“I’ll tell you about that another time. And he might like us to face the east. Let’s see, where is the east? … Now-”
And he began, “Aslan, Aslan, Aslan!”
“Aslan, Aslan, Aslan,” repeated Jill….


Long time no fanart. I just love Narnia and I had to do something about it. <3