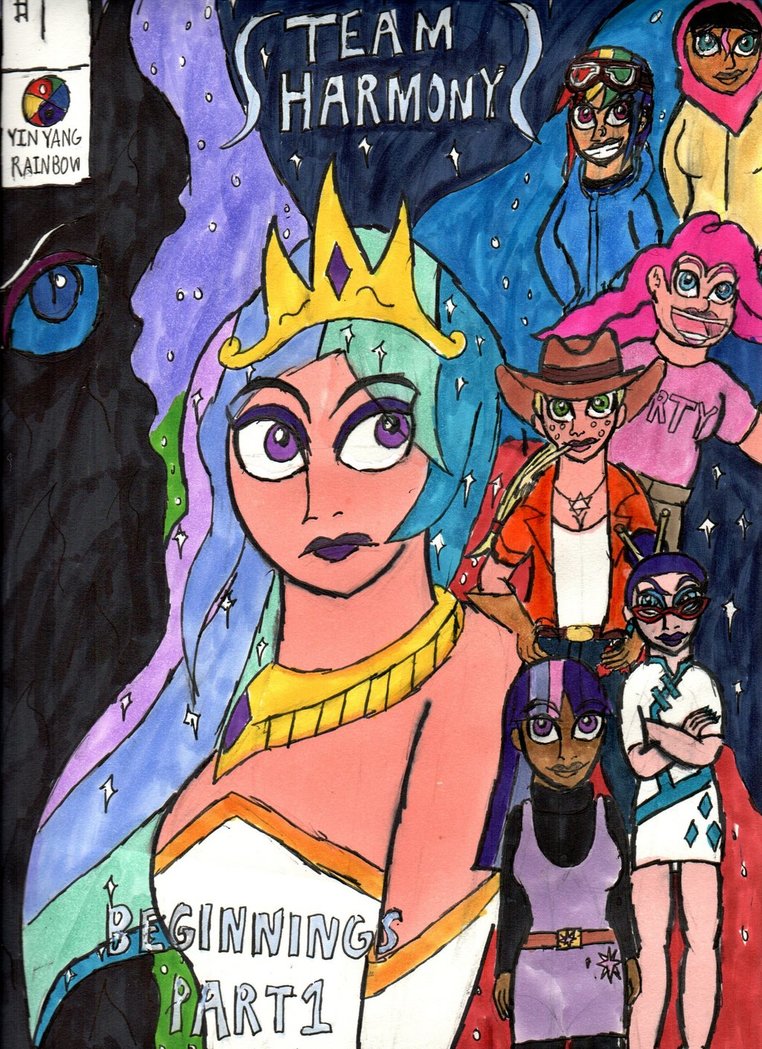 So it's finally here! After years of planning I finally present to you Team Harmony! Basically this is my fancomic of the version of the MLP characters as humans.  So here is the plot.

[font="Helvetica]Tara “Twilight Sparkle” Gordon, Eleanor “Rarity” Wu, Jacqueline “Applejack” Taimanov, Betsy “Pinkie Pie” Boer, Juanita “Rainbow Dash” Gutierrez and Bahiya “Fluttershy” Ansari. Six girls who were outsiders in their own way. Whether it be by race, nationality, religion, interests, sexuality or weight. Until one day they all met, at first they did not get along, Tara was seen as too cold, Eleanor a snob, Jacqueline a hick, Betsy too annoying and hyperactive, Juanita a hard head and Bahiya too shy until they found out their principal, turned out to be the other worldly ruler known as Queen Celestia (Why a queen? She rules an entire kingdom man! Queens are not always evil!) Celestia has chosen all six of them to combat a greater evil: Nightmare Moon who used be Celestia’s younger sister, Princess Luna. Celestia gives them the elements of Harmony each element giving the user powers that suits them. With the Elements the Harmony Sages must stop the Evil Nightmare Moon while facing the problems of bigotry, life and school.

So what to expect from this series. Well for starters, it doesn't take place in a Equestria..well technically not. Equestria has been renamed Harmonia because well no horses and the Mane 6 lives in a middle sized town in Pennsylvania. Don't worry you'll still see the magicial adventures of these girls similar to the  MLP series (Hell half of the stories here are retellings of Season 1 episodes) But expect a darker and mature tone for some these stories and expect a silly and comical tone as well. You'll see the girls battle magic users, monsters and bigotry! That's right, you'll see some of the stories to  touch upon issues such as racism, sexism,homophobia etc. Also I would love to thank my main man and co writer. Without his writing and him adding more content to the story I don't know where I would be right now with this. So please enjoy and more pages will be on the way.

Plot: For this story, A great evil has returned to wreck havoc on the land of Harmonia! Queen Celestia must now gather the newest incarnation of the Harmony Sages to combat this evil! Meanwhile, High School Senior, Tara Gordon despite being top of her class is having trouble making friends. [/font]
[font="Helvetica]Read here and if you want to see more be sure to follow them. More pages wll be on the way.[/font]
[font="Helvetica][url=https://thezackburg.deviantart.com/gallery/63513507/Team-Harmony-Comics][font="Helvetica]https://thezackburg.deviantart.com/gallery/63513507/Team-Harmony-Comics[/font][/url][/font]
[font="Helvetica][url=https://www.pixiv.net/member_illust.php?mode=medium&illust_id=67207068][font="Helvetica]https://www.pixiv.net/member_illust.php?mode=medium&illust_id=67207068[/font][/url][/font]