Burned Out Streets of Budapest

Burned Out Streets of Budapest

Burned Out Streets of Budapest by thezackburg 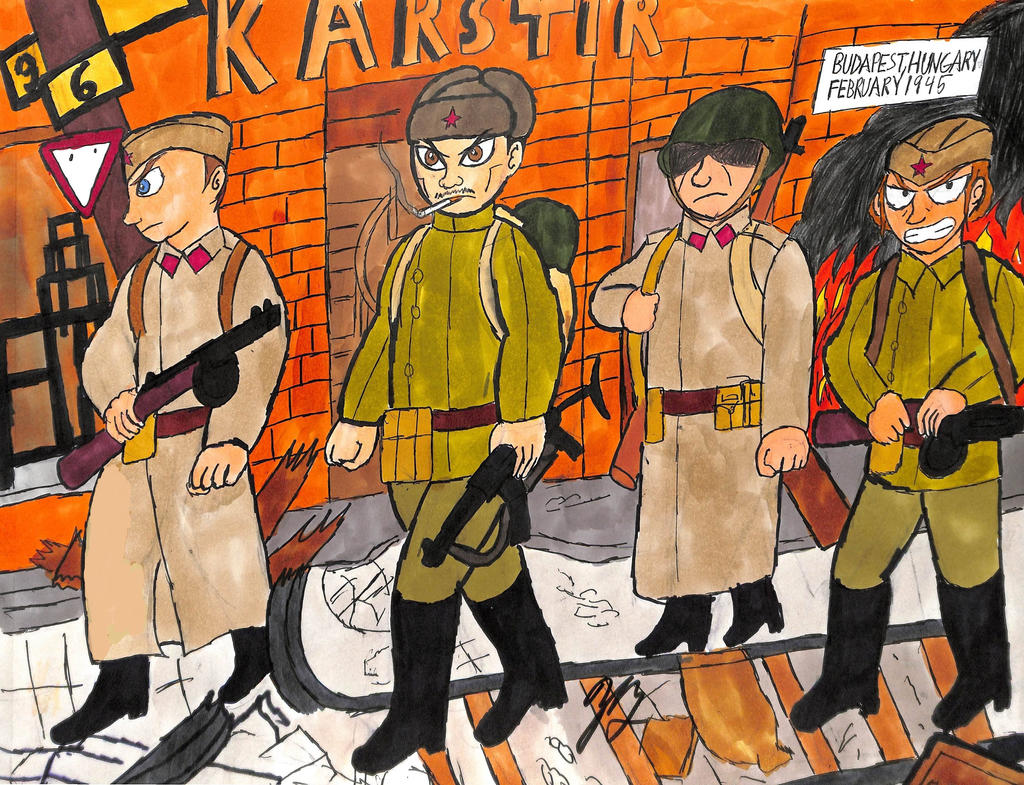 Here we have Soviet Soldiers in the Eastern Front during World War II in the Siege of Budapest in 1945. After kicking the Germans out of the Soviet Union, the Red Army pushed forward. One of those was southwards to not take out the Germans but their allies of Romania, Hungary and Bulgaria. Here the Russians pushed into Hungary beat the Germans and their Hungarian allies. Thus taking the capital of Budapest. In which later Hungary would become a Communist puppet state for Russia.

It's really a nice touch you depicted inhabitants from all the part of the Soviet Union in one picture - I can recognize the following:

- an Eastern-European leading the patrol,

- a Siberian native (either from Buryat, Kalmuk, or Nenets tribes - hard to tell due to uniform replacing tribal outfit)

- an almost-typical-Moscovian (the helmet is obstructing the facial features);

- and one of those Russian citizens with mixed heritage, who live in settlements along the Trans-Siberian Railroad.

Judging by their weaponry (2x PPSh-41, 1x PPS-43, and apparently an AVS-36 rifle, judging by the barrel shape) and the M1935 pattern coats worn by the two soldiers, they must be a unit with certain combat experience, since inexperienced squads had limited access to submachine guns and semi-auto rifles (usually only the squad leader carried such one, one soldier handled the DP light machinegun and the rest squad members fought with Mosin bolt-action rifles).


The saddest thing is that this so-called "Soviet liberation of Eastern Europe" led to the Iron Curtain with all its flaws. However, it did also prove, how ineffective the Marxist model of politics and economy was - Hungarians expressed their disgust in 1956, Czech and Slovaks in 1968, we, Poles did in 1956, 1968, 1970, 1976, 1981, and finally in 1989, which brought the inept model of economy and government to its proper place.

You are correct. Though the last one was supposed to be a Hasidic Jew especially with the hair coming how his sides

And yeah I heard about that though I wasn't aware of how many times the Polish did it.. Funfact and this might get you a little angry but I had to get rid of a friend of mine who tried to justified the Communist Imperialism over Eastern Europe (She was a tankie)

Right - I see the hairdo.

As for the person you mentioned, I'm not feeling angry - more like wondering, what do people like the individual in question see in a regime, which was built on wrong assumptions and proved to live on the people it was supposed to "liberate from oppression." It's quite sad that the British are polarized politically and most of them seem quite appalling folks - the easiest ones to encounter are either rabid leftists, like the aforesaid tankie, or snobs, who consider themselves above anyone and anything. Chances of meeting a regular British online without a moral taint have become quite low nowadays...

Because for some people in the West especially of my generation see communism as a way out of  capitalism which has managed to screw us over as well. Of course their wrong on how it should be fixed. It's mostly idealistic thinking but I can understand why they think like that despite how much it's messed up.
While the British are nice people, you have to remember like how the Soviet Union did horrible things to the Poles and other Eastern European countries along with the Caucasians and Native Siberians. The British Empire has done some horrendous things to the people of around the world. I have friends from Ireland, India and South Africa who are still angry at the British for the things they put their countries through similar to how you feel about the Russians. Like I said most of the British I met are good people. But at the same time again I can see where the polarization comes from because there are still those who believe that the British Empire should return despite causing so much suffering for millions of Africans, Asians and Irish.

I haven't forgotten about the British Empire fans - the term I used in my previous comment "snobs, who consider themselves above anyone and anything" was supposed to cover those individuals. Perhaps I wasn't precise enough.

A couple of my American and South African pen friends will testify the words of your friends from Ireland, India, and South Africa about the British colonialism - especially the latter tasted the British yokel quite badly. They made me familiar with their terms to call the British people:

- "Pom" or "POM" = "Prisoner Of (Her) Majesty" (often used in softer form "Pommie") - a common nickname for the British soldiers in South Africa and Namibia, dating back from the Boer Wars

- "Platpot" ("flat-paw") - a Boer term for the British soldiers, referring to their lack of mobility in the Boer Wars;

- "Khaki" - because of their KD (Khaki Drill) uniform colors introduced in 1899 and used until 1939 - you know, those sand-khaki jackets with exposed brass buttons commonly seen in WW1 trenches and early stages of WW2;

- "Lobster Tails" - my pen friend from Kentucky told me this term, it's dating back from the Independence War 1775-1783 and refers to their red uniform color and also their lack of mobility in that period.

We also have a derogatory term (barely used though) for British in my mother tongue, applying to their politicians (regardless of their political option) and soldiers (especially above the rank of colonel) - "dżok" (spoken "dschokh", Polish pronunciation of the English word "joke"), derived between 1939 and 1945.
It was developed after Neville Chamberlain's appeasement policy proving to be a failure and the way Winston Churchill betrayed us twice - by selling my homeland to Stalin in Teheran and Yalta, then when he told General Władysław Anders after taking the Monte Cassino Monastery in 1944, that he can go back to his homeland, even though Churchill knew that NKVD would assassinate or send to a gulag any soldier of the Polish 2nd Corps (with general Anders as the priority target) without blinking an eye.


All I can say is that the British and their culture seem composed of extremes cobbled together:

- you have their imperialism, its apologetics, their leftists, and plain unsavory folk on one scale (I won't forget the messy toilets in restaurants I saw in London back in 2008 when I was on a family trip);

- on the other hand, the same British also invented Warhammer 40K and Bolt Action tabletop games (yes, I enjoy both of them, even despite Games Workshop's pricing policy is crying out to Heaven for vengeance - check their retail prices), not to mention their share in worldwide's science can't de disputed (Lord Isaac Newton and Francis Crick make perfect exemplars) or the few decent folks you can find amongst them, they make indeed good friends when approached correctly.

Of course, the aforesaid remarks apply to any nation.