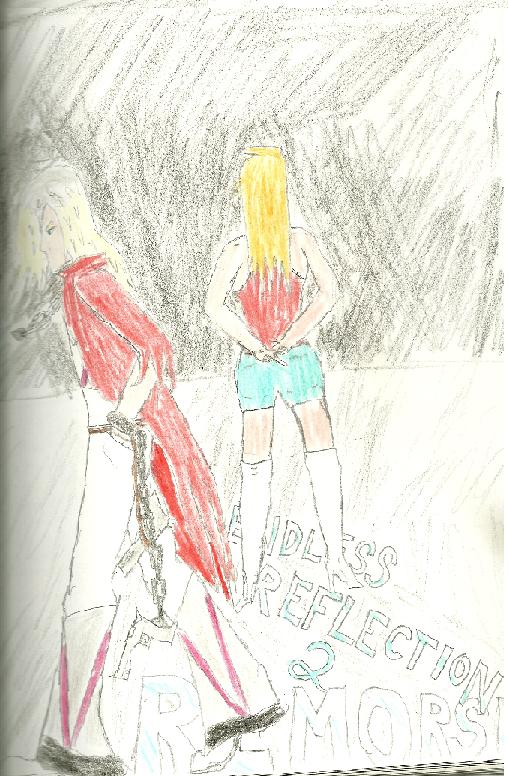 How it pains me to shink things and lose all that data....The problem with scanners.
This was the first image of Sylis drawn in/for ER2.  The full name of the issue is "Endless Reflection Book 2: Remorse."  The covers in order are the first cover portrayed the antagonist of the first ER (World Crashing Down), and the second The Girls of Endless Reflection.  This cover's title would be Resentment, which is also the title of the final chapter; CH9:Resentment.

Sylis is shown wearing a red coat here, originally he was going to aquire it early in ER2.  As fate had it Sylis kept his mainstay green coat.  Silver did give him the red coat between CH6&7, but Sylis threw it out.
The gun hanging from Sylis' arm is named Chain, it is the only gun that has yet to be confirmed to be replaced in ER2.  Nameless and No Name were replaced by Heartless and No Soul at the end of CH3.  This was to give the guns more durablity as the originals broke, and for an asthetic change.  Heartless and No Soul have been upgraded since CH6, changing their appearence yet again.

Silver is shown with her back turned with her hands behind her back, she is gesturing cocking a gun, this is due to the fact she is a robot, and her hand is actually a gun, which was uncreatively named 'Pow.'  The way Sylis and Silver are positioned suggest them parting ways....which may happen in ER2 but we won't find out yet now will we?  Silver used to wear purple, but bought herself a red shirt because seeing the blood of an enemy inspired her to try wearing red herself.

I get inspired at night I should be writing ER2 now....Actually I should be sleeping I have school in the morning shhh...