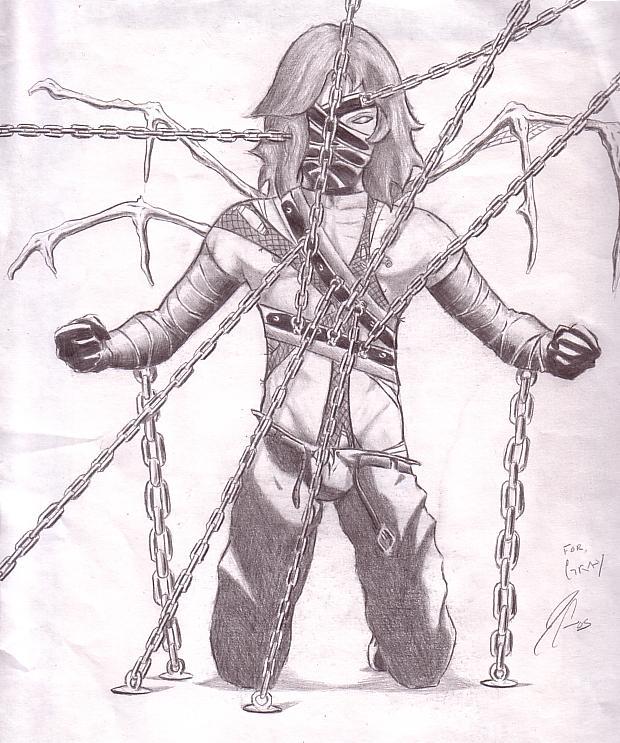 woah! that is such a sweet picture!! totally awesome job!

dude... you just keep outdoing yourself... shure, this may not be you best picture...

but the sex! that radiates from this picture... it's frightening

what can i say that u havnt already heard me say......hhmmmm, i know. If i were dis drawing, i'd be very pleased with the way i look! excellent stuff!

Awww cute. Man being...tied up or something. He is tied up isn't he?

Why is he in that situation? doesn't it hurt? What's up with you and Sixx's obession with such things? Why would you want to dry hump something with chains? I can't even imagin you or Roberts or Sixx dry humpin' someone who has this junk all over him!

Poor guy. ;__; I want to free him. I shall draw this man being freed. ANd he will be a happy man. ANd he shall be called "This man"

I mean this could be a new cult...didn't chrstianity start out with people drawing guys getting killed on crosses and it..you know probably made them a little giddy in the nethers too.

OH Are those wings...? Someone with wing type branch things tied up. Oh my...

Drawing's a little flat. Doesn't look Three dimentional you know. You failed to create that illustion. He looks like a cardboard cut out. Who must be free....

First you draw Roberts having gay relations and then this...I just don't know what to make of this. It's almost as if you have a thing for this lanky british man.

Oh snap! That is so hot. I just wanna like dry hump that into submission. ; )

Well maybe not dry hump but I would totally want to hit it. Gray makes a very lovely dog. : ) Wonderful job James. Just everything about it is great. The line work, the shading, the theme..everything rocks in this pic. : D

DUDE this is sooooooooo rockin you draw soooooooo good!^^

haha, i was planning on making a series of these too :P so awesome, we are sooo like on the same wave length dude :D

but first i need to get to the jinx/snow smut :)

You should do this kind of character for yourself and make like a series!! :o

I agree with DF

Teh kinkiness of the picture is teh hawtness x333

If Jinx were here, she'd be loving you right about now. She's been wanting a Bondage Gray for awhile. XD

Where's that whip and mace? I must have left it at thomas's house when I... well.. nevermind. xD SEX!

And the pants... and the falling down... and