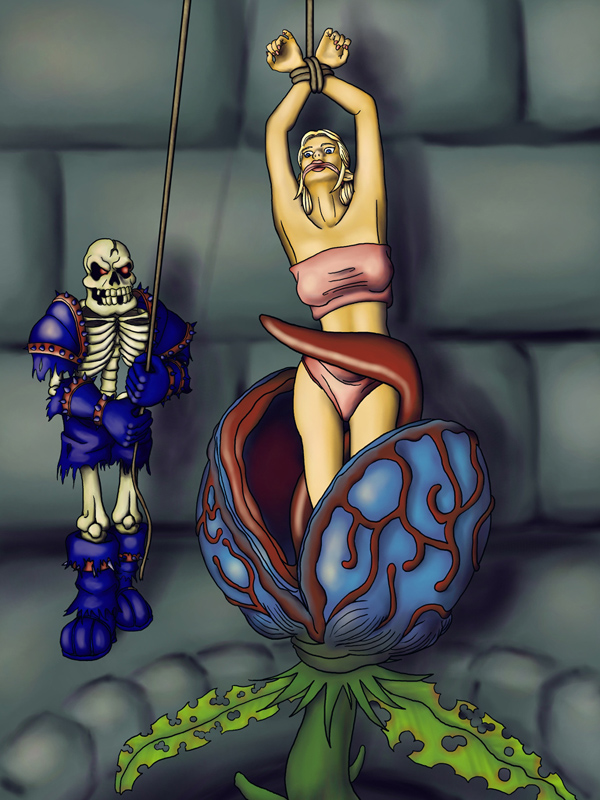 Ganondorf realized that by keeping the various princesses around while hatching his evil schemes, they had come back to bite him in the bottom several times. This time, after capturing Princess Zelda and securing the Triforce of Wisdom, he resolved that he would not make this mistake again. Deep in the pits of his fortress, he had bred a giant deku baba just for this occasion. He ordered a Stalfos warrior to carry her down and feed her to the ravenous plant. He kept her clothes and dressed her in rags so he could later prove to Link that he had captured her.<br />
<br />
Down in the dungeon, the Stalfos bound Zelda's wrists, suspending her by a hook in the ceiling, standing her at the edge of a pit. It then held onto the end of the rope, and kicked her from behind into the pit. As she swung over the pit, the giant deku baba that made its home there rose up, catching Zelda's feet in its enormous maw. It's long tongue extended outward, wrapping around her legs and waist, and pulling her in deeper. Once the Stalfos saw that the plant had her firmly in its grip, it let go of the rope, watching as the plant slowly dragged Zelda's bound and helpless form into its digestive tract.

is she gonna die?
cool pic BTW! I wish i could draw like you can!

What the HELL is up with u?!

NOOOO! Not Zelda T.T
But its very nice pic! (Stalfos is spooky O.o)

I love your pics, but it's really interesting how you also create stories out of them, too. *SIG* I wish I could draw as good as you!