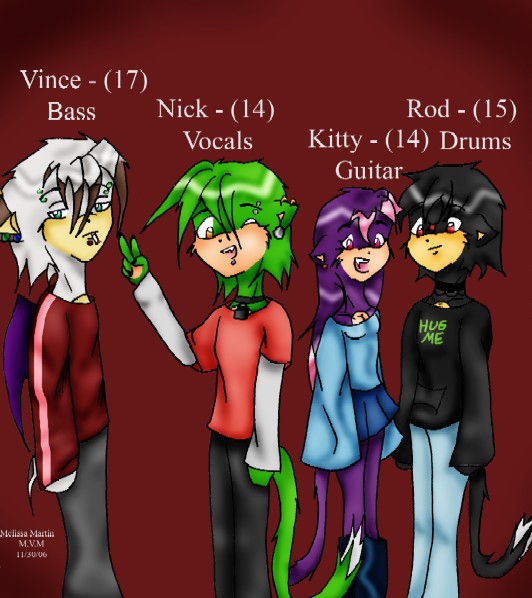 Attention! I am holding a contest! This notice is going out to everyone on my fans list! (There are about a hundred of you! XD) First of all let me than you for adding me to your favorite artists list! Anyway, I have been writing a story about my original characters since March. It is called “Starting to know me” (Check it out if you want! I have 17 chapters thus far.) In the story the characters start a band. There is Rod, Vince, Kitty and Nick. I need one more character. That’s where you guys come in! It’s a character design contest, but there are some qualifications. 1.It must be a girl. 2.She has to play guitar. 3.When you post your picture of her, you must include a short-long (however you want) biography on her. You must include her name (full, first and last, middle name if you want) age (and birthday), likes, dislikes, and tell about some things in her past as well as her personality. The contest will run from December 5th 2006 to January 5th 2006. Let me know if you are going to participate so I can put your name down, also let me know when the picture is up so I can know to go see it! First place winner will obviously get their character in my story and I may use her other pictures I do later. I may use some of the other characters you guys come up with somewhere else. First Second and third place’s get a request. Thanks guys! Leave a comment on my profile saying you are going to participate in this if you are! XD

Yes that is what I am sending out to people, I worked forever on this pic! >.< Oh and btw, the band is called Death Penalty!

Comments 25
Media Digital drawing or painting
Time Taken a long while...
Reference none

I will try, but if we dont have batteries for my camera, I cant get it up
very cute pic, by the way^^

X3 i luv Rod's sweatshirt XDD kawaiii group pic! 0_< omg i havent read your story in AGES 0_0 waaah! i may enter, but i feel that i must catch up first T.T