Crying in the rain 2

Crying in the rain 2

Crying in the rain 2 by Gety 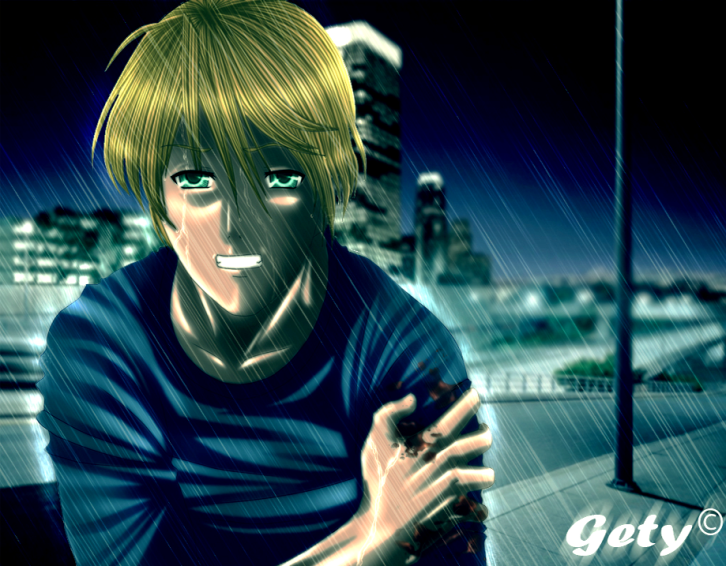 This pic is part 2 of "Crying in the rain" and the man in the pic is Ron's father. Now we are gonna listen to his version of story.(Please read part 1 first)

Ron's father is called John, he had a twin brother called Leon, his twin was dealing with illegal things, such as drugs etc...He had big debts and was followed by many gangs. One night he was escaping from those gangs when he had a car accident and died immediately. After some weeks the gangsters were following John, thinking that he was Leon. John had no clue that he was followed.
The gangsters followed him till they found out where he lives...then after some days John's wife got sick(she was poisoned by the gangsters with some food they sold her on the market). After John came home, he was terrified, he took his wife to the hospital immediately. While leaving the hospital room, John noticed that he was followed by someone, he ran after that strange man that was following him out of the hospital on the rainy night.(Ron and Rina were at their aunt's place, after Ron heard about his mom, he went to the hospital. He asked the doctor about his mom and dad, the doctor told him that his mom will be alright and his dad ran after some man, so Ron went searching for his father.)
-John had lost the strange man, unfortunately he was too fast, so he decided to go back to the hospital, where he finds out that his wife was brutally killed by that strange man, in that moment Ron opens the door. Ron saw his mom dead on the floor with her body parts riped off, and his dad next to her.
He was totally terrified, John tried to explain everything to him but he wasn't able to listen. John took Ron's hand and wanted to cheer him up, Ron was so terrified that he took a piece of glass that was lying on the floor and stabbed his father on the left arm 4 times, till the piece of glass broke, and then he ran off.
-After that incident, John couldn't speak one word, he understood what was going on and that he was followed by a lot of gangsters. He could never be happy with his family again, so he decided to go somewhere far away, to not bring his family in danger anymore.

Sorry I couldn't tell every detail here, this is the story on a nutshell.

why does it look as if you dont draw it but make on a computer program or sumthin such as photoshop?

Because it is drawn on PC/Photoshop.

I think I found a good song to go with this, tell me if you like it!

Yeah I definitely like it, but I think this fits better to it
http://www.youtube.com/watch?v=dkvb0GuqiE0&feature=related

this is rly kool i love it

that is TRAGIC, my friend... and this is areally REALLY good picture. awesome job. ^^