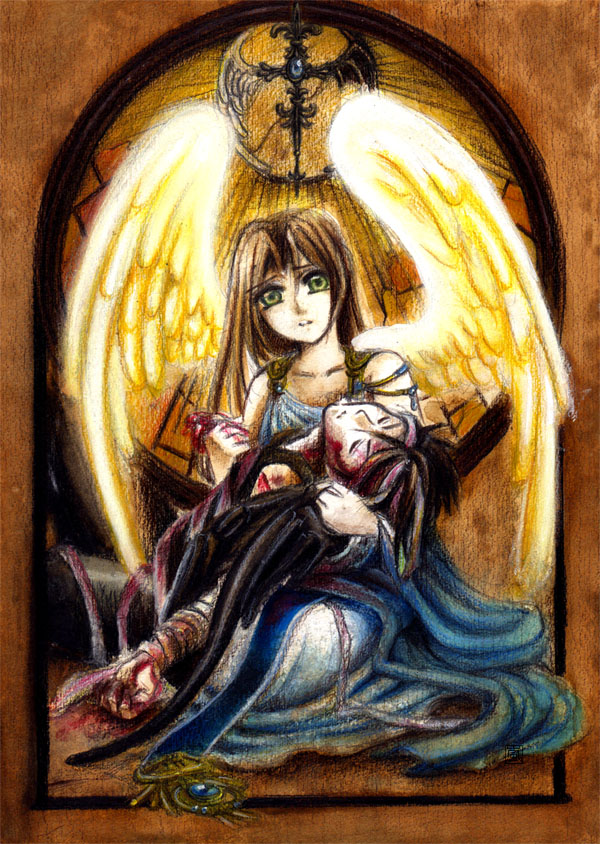 Many apologies to Sagered that it took me such a long time to get this done..^^;; Still, hope you like it! (they don't seem to look like Sage and Crowe to me...T_T)<br />
------------------<br />
Okie...this was an trade with Sagered and for my part of the trade, she requested for a pic of her two OCs Sage and Crowe. I was told that Sage is a Goddess while Crowe, who later fell in love with her, happens to be one of her gaurdians (a vampire too). After reading the description she sent me and going through her gallery for Sage and Crowe pics, I decided to do something different from the usual, that is, to draw something sad and bloody (man, this doesn't look sad and bloody at all...T_T) <br />
<br />
During the colouring process, I went a bit crazy with the mediums. (I wanted the 'old painting on the church wall' feel ) See the brown? Yea, it was coffee. (erm..not the brewed coffee, but the instant type) A very nice brown it gives, and a very nice aroma it spreads too...Everyone in the house started to wonder where the smell came from... After the coffee dried up, I applied pastel to the characters (after a hard long futile search for colour pencils...;_;). I don't really know how to make the pic sharp with pastels ^^;;, so I added water to the pastel for some parts of the pic (ermm..ya, I dunno how to use pastels. XP) ..Got stuck with the colouring for a few hours...and came back with my younger brother's colour pencils to get the details done. (whew...)<br />
<br />
Kind of like the overall effect, but the characters don't look like themselves again....why...

AH! So they're pastels! ;o HOW BEAUTIFUL! The wings really stand out! *0*

Very beautiful. You did a great job with the coloring. :)

goodness gracious great balls of fire! I love it!

nice.that is an awsome pic!