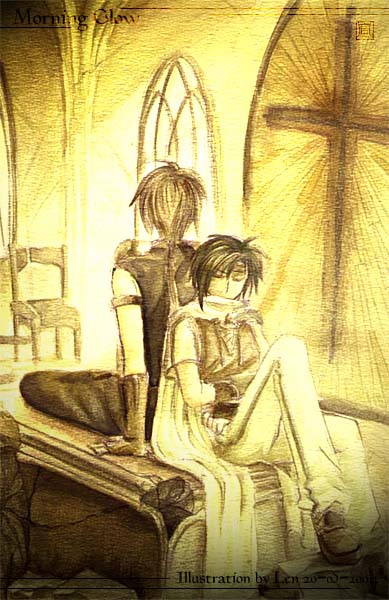 Okie....it has been quite a long long time since I've drawn the two of them together....I used to draw them during the first few years of my manga character drawing life and they are of the first few characters I've thought of. (And so, you can imagine how bad the previous piccies are like...)<br />
<br />
Azure (that little guy sleeping there) was initially inspired by FFVII's Vincent, but as time goes by, I changed a lot of things here and there, and now, he looks like MKR's Lantis... (as according to some. Personally, I think he looks more like Touya...XD) As for Len, he was not really inspired by any other character. :3 He's one of those characters who are formed bit by bit as the other characters move along, just to piece in the fragmented story (which makes him unpredictable...hoho).<br />
<br />
Anyway, enough said about the origin... Back to the piccy. Done by watercolours. (I'm still trying to get better at it :p) The scanning wasn't very good, so I did some adjustments with Photoshop. Had a hard time with the cracks on the altar...(That is in a church, an abandoned one, where the two of them practice swordplay almost everyday.)

wow....your drawings are so awesome!!! I love the whole light effect, it looks so neat!

congratz on being on the picz of the hour! this really is an awesome pic! great coloring i lurv it. :D *gives u cookie and skips off*

ooooooh! its so awesome! i luv the lighting and everything! im completely speechless..wow!

thats really amazing picture. the name really describes it a worthy picture of the hour. drawn very well and really the colour is great.

That's beautiful and the colours are really good with the scene you have done.

Oooh!! Tis so pretty! I love the parchment effect! Everything look so beautiful!

WHAT ISH THE MATTER WITH ME?! I had this on my favs... and I haven;t even commented on it!! BAD ME!!!!! *Hits self with Muffins and them bows to Len* I'm srry! *Holds out Muffin for Len* Plz forgive me! Ur pictures are amazing and wonderful! U are talented and a great artist! I luv the color shading. I luv the Church place! I luv Churchs stained glass, so I luv Churchs with Stained Glass. NEwayz, won't say no more here. *Bows again to Len* Again, srry!