The Wheel of Fortune

The Wheel of Fortune

The Wheel of Fortune by Nintendo_Nut 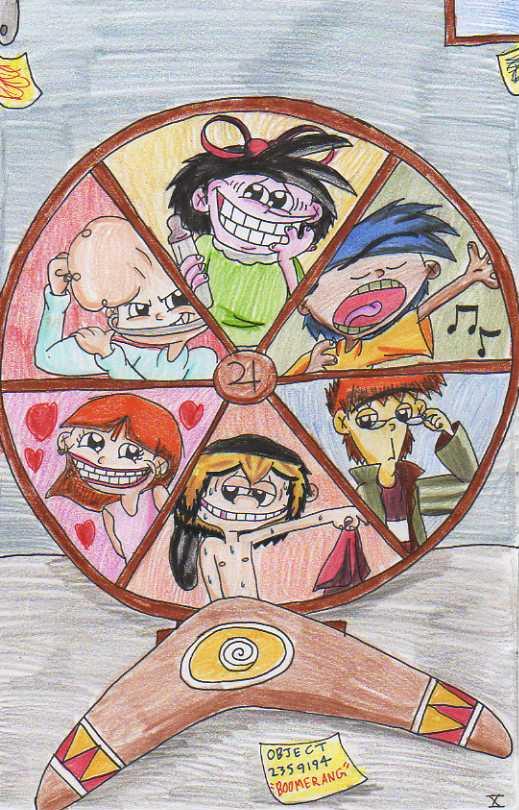 X. The Wheel of Fortune

Transformation; a series of changes necessary for inner growth.

Planetary Symbol: Jupiter
To expand, to get "more," to philosophize, to teach.

OMG, this is my favorite card so far. Wanna know why?
I had NO IDEA what to do with this at first, so I was brainstorming... while watching "Run For Your Ed." Then "Hand Me Down Ed" followed soon after and I said "OMG YES" and did it.
God. That episode was the funniest thing I've ever seen on television. Not too many things can make me laugh as much as I did when I first saw that episode.
When Double D was stripping and Eddy screamed "WHO ARE YOU!?!?", I almost DIED.
.........XDDDDDD
But I love how the boomerang altered their character. Better than switching bodies or personalities, because it MIRRORED them perfectly.
Jimmy became fearless and powerful.
Sarah became kindhearted and sweet.
Rolf began singing classical opera.
Ed became intelligant.
Eddy became motherly and caring.
Double D... he's the tough one. Everyone's all "he's a hippie!" but I'm like, "No, he's a beatnik, listen to the music." XD But then me and Freddy came up with this: he became inhibited. He's always used to being so proper and uptight, and then suddenly he's all "chill-lax" and throws his restrictions away. So, yeah, in that aspect, it makes perfect sense.
.......
...still my favorite card so far. Next to "The Lovers." ^^
Comment!

My sis described Double D as a surfer, only cause he says "Don't try to harsh my mellow, bro."

Hehe... that's gotta be one of my favorite episodes ever. Gotta love intelligent!Ed. (Was it just me or was he sexy when he had a brain? o_O Maybe it was just me.)
Great job, I love the concept. Very creative. =)

I loved that episode, Double D and Ed were hilarious on that eppy. And great pic, you really captured all of those changes well in the wheel.

rofl XD! I love that episode! I haven't seen it in so long though. Creative idea =D *faves*