Hey guys. I know I haven't been here in forever, and there's a reason for that. The latest internet we got cannot load this website anymore. And since i'm so far behind gallery-wise, know that I won't be posting here anymore. All my work is over at deviantart, though, so that's where you'll find me, under the name Nintendo-nut1.

Hey your Ed pics are really good! i love the Eds :D

wow! I love your art! you're really talented! I've viewed most of it (other than the gay stuff, no offense, i'm a christian and i just don't like it... but let's not get into that lol!) btw i've looked all over and what's yaoi? i know i'm a noob, but i can't find a dictionary for that stuff!

Hey I like your EEnE pics they are uber cute!
I think I now of a website who would love your work also!
http://edsyaoiland.heavenforum.com/index.htm
Please join and help the world realize that EEnE yaoi is awesome!! 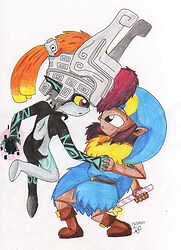