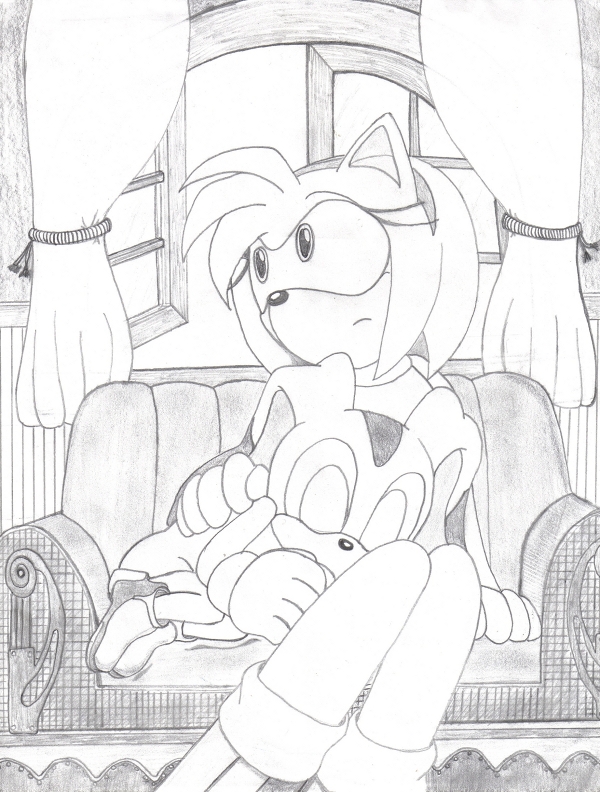 Holy crap, I still exist... I'm just as surprised as you are!

I have some old STH type doodles and drawings that I will likely never ever submit anywhere, so I might as well submit them here... I kinda outgrew my heavily referenced drawings, they have never felt very good to me, and non referenced drawings are liked by no one... and I figure this is better here then hidden in the 1500GB's of my HDD.

So here is a recreation of the scene from the end of the Japanese S onic X end of the one season before they got really stupid and started to fight t rees in space... TREES IN SPACE! (freakin space t rees! And then a fox falls in love with a cabbage... a self aware cabbage!)

This is when S onic took longer to get home then the other characters and they didn't know where he was (seemed like they really didn't care for the most part too LOL) meanwhile Sonic was in Station Square going to Furry-cons with Chris (The token Human) Thorndyke... so this where he comes back and is seemingly burning up in the p lanets atmosphere, Amy is with Cream, no doubt she made her drink the "special Kool-aide" and that's why she has passed out...
:p

When I started to draw this in 2006, I remember pausing the D VD a lot to see the whole image, and then ignoring a lot of it and basically ruining the whole thing in the end...
I lost this drawing for years till I found it a few months back and would doodle over it while on the p hone, I don't suppose I will ever like it.

I am not really here still though, I am on Devian tArt and Flickr a lot more often.

Maybe one day I will draw some R obin hood (the D isney one) or some NIMH art one day and submit it here... who knows, not me.

(spaces are in words to disable ads)

Hey! Its been a while huh? I just came back for a little visit and decided to look at your gallery. You did a great job once again! How have you been?

Hooray I'm not the only one who exists! :p

I'm not too bad, I hardly ever go here anymore, mainly just to repy to messages, and occasionally add some art, but that's rare...

This pic (couples with the most accurate and hiliarious description) of Sonic-X I've ever seen is an absolute winner! You get bonus points because you didn't even take the cheap shot at the voice acting!

...and then there's that terrible voice acting!

Space trees and self aware cabbage, I need to be heavily medicated for that to make sense... very heavily!

Well now that S onic is back, I guess Amy can sell Cream to a chinese restaurant and they can hang her in the window...

I wonder if her feet are lucky?
We could make stew out of her... lucky stew!