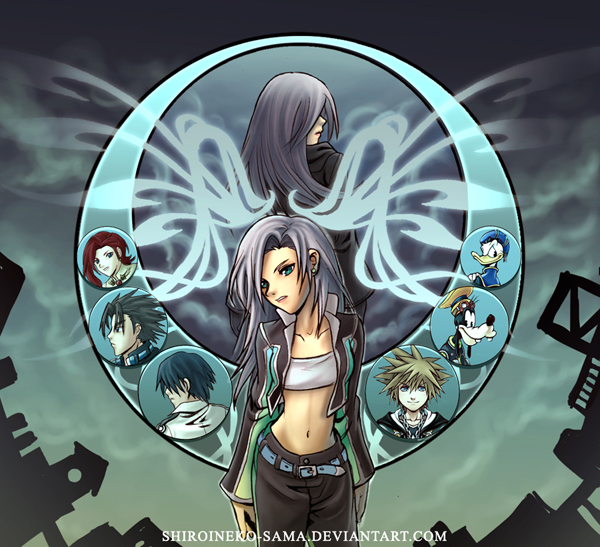 So yeah, from my FF7 fancomic, Dawn of Melodies, I decided to create another story in the Kingdom Hearts 2 world.

Story?
In a world called "Eternal Dawn", Freya became heartless trying to save her friends, but was suddenly revived and pulled out of the darkness by a certain mysterious boy. But after that, a strange black tower suddenly appeared and the world was engulfed by darkness. One by one, the residents of the world starts to disappear, leaving only a few survivors. It's up to Sora and the gang to stop the darkness and save the world. And what's this? A new Organization 13 member?

If I succeed in finishing my FF7 fancomic, I might draw this story out.


My notes about the artwork, I SO DIDN'T DRAW SORA, DONALD AND GOOFY!!

Btw, Freya, Eli and Lance are actually characters from FF7 fancomic. Check out my gallery to see their original designs.

Very awsome, the colors just leap out at me and the shading is top notch along with the poses.

This looks like a very promising comic, I wish you the best of luck! ;3 I know I'd read it.

wow that all i have to say 2 u

Hi my name is Rachel, and I came across your artwork in my search for pictures of heartless. I truly enjoyed your picture. :) :) I am looking to get a tattoo of a heartless in specific - one tearing at my skin in search for my heart. Since I am no artist, I would like to see if you could help me and perhaps draw something up for me. I really admire your work and would be honored to have your help. Please get back to me at your convenience if you are interested. I would greatly appreciate it.
-SlushE
DJSlushE@hotmail.com

I love it: the picture has a really good theme and mood, but that whole Goofy/Donald thing kind of makes it... Well, goofy, but otherwise it's terrific!  LOL  I love to look at it, but then my eyes go to Goofy and Donald and I grin...  LOL

i LOVE this, the colors are so pretty!!
*favs*