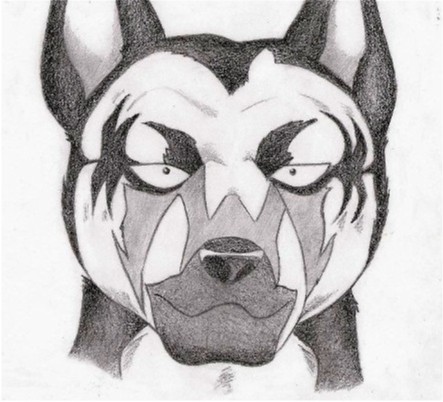 And it’s Jerome-son!! LOL
Crap, no wonder Studio Dean sucked animating some of the anime, this took me just forever to make the markings on his face! I thought the outcome of this was going to be a lot worse, but I actually like it, thank you very much!
~SPOILERS~
I heard that in the Magma Jerome in fact does not die, though I haven’t read it.
I don’t know why they decided to kill him off in the anime…probably for the same reason JK Rowling killed of Fred, Tonks, Hedwig, Lupin, Mad Eye, Dobby and Snape in HP7….XD

Awesome, I love that show, and Jerome is mah fav chara! *favs*

AMAZING!
that is one friggin awesome piece of art! Jerome is mah fave character! *faves*

I luvs Jerome! i wanted to cry when i saw him die... but, i don't think he dies, cause we would've seen his spirit thing...

I like the show ginga densetsu weed, by the way you draw them real good

I love Jerome, my favorite character. I love this. ;)

Man, I can't draw Jerome worth crap. I love it, FAVES!

Its soo identical to him!! I love Jerome, he's soo awesome!!! Your work is awesome too!! Faves!!

Woah it's awesome! I love the shading and the pose here, you did a great job!

Wohoo Jerome!!! He is always trying to be so mature, but I think that some times Weed is even more mature ;) Nice job! btw I love Gin and weed!